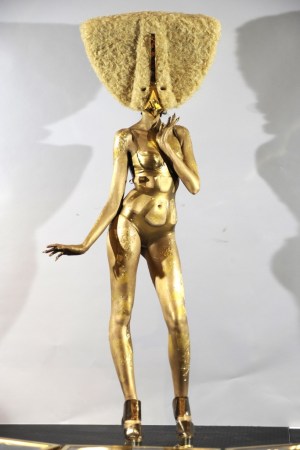 Dancing and prowling through the crowded aisles on the second floor of Paris’ Galeries Lafayette, the models displayed the intricately woven creations. One was fashioned into the shape of a woman’s face, while another resembled a totem.

“I was really inspired by lots of different African tribes, but mostly by the Queen of Sheba because she is a really strong and powerful woman. I’ve always been inspired by the very intense woman,” said Le Mindu.

He added that his two favorite looks from the line were a pair of horns and a soaring Afro headpiece.

“It depends on who’s wearing it though,” continued Le Mindu.

For the looks, he used extensions from Hairdreams.

Up next for Le Mindu is an exhibition about chess and queens with the Alexander McQueen brand at the World Chess Hall of Fame in St. Louis. For it, he is designing the hats and hair.