Paris Turns Out for Charity Dinner 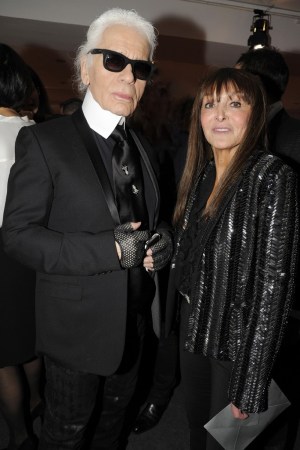 It was a living who’s who of the fashion industry Thursday night at Numéro editor in chief Babeth Djian’s benefit in Paris for Rwandan children. Karl Lagerfeld, Jean Paul Gaultier, Alber Elbaz, Viktor Horsting and Rolf Snoeren were among attendees at the sit-down dinner supporting the association Un Avenir pour les Enfants du Monde, or AEM.

As people mingled prior to the meal, the impending holidays were discussed with enthusiasm. Gaultier said he would go to southwest France to see family and also, possibly, to Greece to visit with friends. Chantal Thomass will make her way to Los Angeles “to rest, wander around, shop, do a little spa and soak in some sun.”

Vanessa Seward is Brighton, U.K.-bound; Kilian Hennessy will spend Christmas en famille in Paris, and Elie Saab is to hit the slopes of Courchevel, France.

Horsting and Snoeren count on “chilling at home.” “There are quite a few things coming up next year because it’s our 20th anniversary,” said Horsting. “Actually, today is the sixth, and December 1st was exactly 20 years ago that we started working together.”

For his part, Elbaz hasn’t got an agenda sorted out yet. “I have a tendency to make those plans at the last minute,” he revealed.

“I have no holiday,” continued Lagerfeld. “I do couture. I like to be in Paris and have time.”