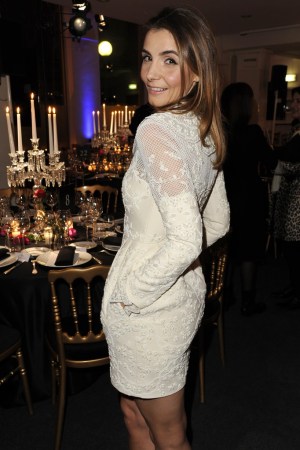 Parisians aren’t the most obedient folk at charity dinners. Despite her non-stop prattle on the mic, cajoling people to take their seats at  Numéro editor in chief Babeth Djian’s annual dinner for Rwandan children, zany television presenter Mademoiselle Agnès could not stop the fashion crowd from its frenzy of end-of-year schmoozing on Tuesday night.

Designers including Karl Lagerfeld, Jean Paul Gaultier, Peter Dundas, Pierre Cardin and Viktor Horsting and Rolf Snoeren poured into Espace Gabriel along with a fleet of models and film stars.

Pierre Niney, who is said to have nailed his portrayal of a young Yves Saint Laurent in the forthcoming Jalil Lespert biopic, said he’s soon heading back to the Paris stage, appearing in a production of “Un chapeau de paille d’Italie” (The Italian straw hat, in English) at the Comédie-Française.

“It’s a lot of singing and dancing, very Broadway,” the young actor enthused. He also let slip he is to appear in his first English language feature next year, a thriller.

Marina Hands, in a sequin jacket by Zadig & Voltaire, said she just wrapped “Homosapiennes,” a comedy starring a who’s-who of French actresses, from Isabelle Adjani and Vanessa Paradis to Laetitia Casta.

Her role? “I’m the one who’s cheated on,” she said with a yelp of laughter, explaining that the movie is in the vein of Pedro Almodóvar’s “Women on the Verge of a Nervous Breakdown.”

Before heading off for the holidays, Clotilde Courau said she would perform some Serge Gainsbourg songs, and a few from her own repertoire, at Mathieu Amalric’s new venue in the 20th arrondissement in Paris.

Courau portrays a trophy wife in her next film, “Babysitting,” due out April 9 in France. Her wardrobe? “Elie Saab,” she purred.