Like her mother-in-law, new Queen Letizia is fast becoming a pro at what she does. 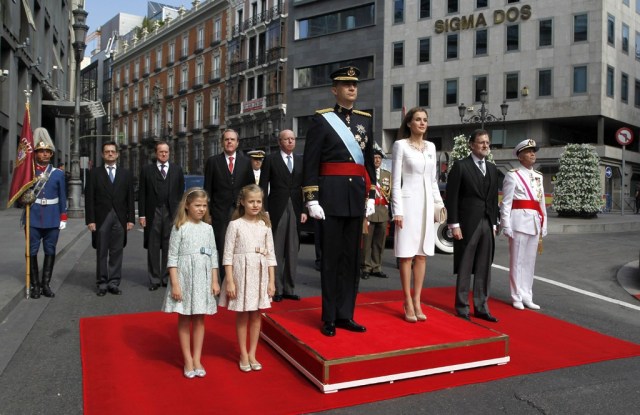 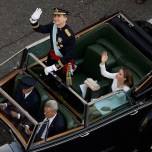 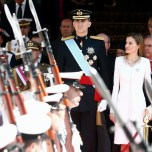 Forty-one-year-old Letizia Ortiz Rocasolano has been training for the royal job since she wed Felipe de Borbón, 46, in May 2004 in a gown the color of heavy-cream by designer Manuel Pertegaz. On Thursday, they officially became King Felipe V1 and Queen Letizia of Spain.

It’s been a bit of an uphill climb beginning with the fact that Letizia, a high-profile reporter and television news presenter at the time of her marriage, was a divorced middle-class commoner. Rumor had it Felipe’s parents, King Juan Carlos and Queen Sofia, were not pleased but, in a burst of independence, the Crown Prince and now king said either they go along with his choice or he’d bag the family business.

Since then, the future queen’s wardrobe, cosmetic touch-ups (particularly a well-documented rhinoplasty, or nose job, in 2008), charities based on needy children and rare diseases, and hand-holding nights-out to an indie concert, film or neighborhood eats with friends have been media-fodder for the royal couple.

For instance, who doesn’t know the new queen’s closets — reportedly there are three of them — with a plethora of skinny, form-fitting silhouettes, pencil skirts, and over-the-knee hemlines; feminine lace-trimmed cocktail dresses and floor-lengths are almost all by Madrid-based designer Felipe Varela mixed with a little Adolfo Dominguez and casual fast-fashion separates from Mango;handbags and clutches by Hugo Boss, Boss Orange and Uterque; and signature Letizia footwear or peep-toe platforms, both pumps and sandals, by Spanish manufacturers Magrit and Pura Lopez.

She doesn’t paint her nails or wear gloves or hats unless required by protocol, and jewelry is kept to a minimum.

Hands-on parents, (they drop their daughters Leonor, 8,and Sofía, 7, off at school and tuck them in at night), the new monarchs will continue to live in a palatial 21,528-square-foot house in the Zarzuela Palace compound skirting Madrid which is home too to the former king and queen, who have no plans to move. In fact, the only logistical difference, sources say, is that Felipe will helm the royal desk.  Juan Carlos — Spain’s king for 39 years and widely credited with orchestrating a smooth transition from Franco dictatorship to democracy — is expected to be available for paternal counsel.

As Queen Sofía said in New York during a Unicef event two days after the Spanish king’s abdication earlier this month (June 2), “I am totally at peace with the transition. Letizia is very competent, adorable and I love her very much. She should stay just as she is.”

Like her mother-in-law, new Queen Letizia is fast becoming a pro at what she does. Public service activities have increased considerably to include solo trips to the World Health Organization in Geneva, Switzerland.  In the last decade, the Spanish Princes of Asturias received 7,200 representatives from a variety of domestic sectors, participating in 1,516 official acts and 248 private audiences, and on her own, Letizia received upwards of 2,100 people in 107 audiences, according to published reports. In addition, she accompanied Prince Felipe on 73 visits to 38 countries on four continents to promote Spanish interests abroad.

She has her detractors, however, and much has been made of the fact that she is a commoner. While Felipe speaks several languages, including English and French, Letizia’s English is limited. And while she has been a fashion plate in the Spanish media, she is far from an international celebrity like the Duchess of Cambridge. But now that she is queen, it remains to be seen whether Letizia’s international star will rise.