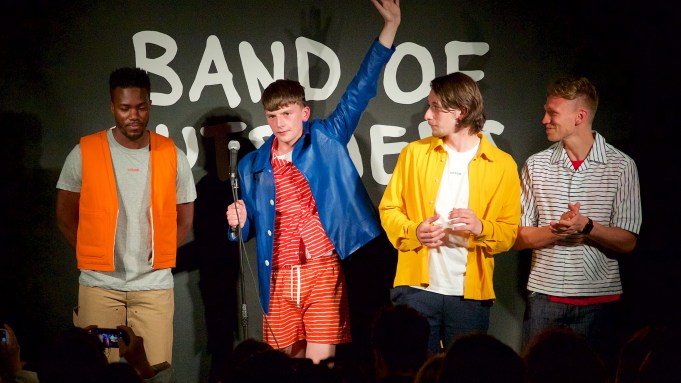 In keeping with the brand’s tongue-in-cheek character, designer Angelo Van Mol and brand director Daniel Hettmann staged their presentation at London’s Top Secret Comedy Club on Sunday night. “We asked ourselves what we could do instead of a classic show, and since comedy is very close to the brand’s DNA, we thought this is it,” said Hettmann, explaining how he spent two months club hopping through the city, scouting fresh talent for the label’s own “comedy show.”

On stage, Joe Sutherland, Elliot Steel, Alistair Williams and Mo Gilligan aka Mo The Comedian each sported an outfit from the collection, while taking delicious stabs at the world of fashion and its droll inhabitants. “I’m not a stranger to fashion myself,” punned Sutherland, “I’m a former model-turned-aspiring model. And now look at me. Oh, please, please look at me,” he begged, clinging closer to the mic, before conceding there was no point. “I stopped — because they asked me to,” but also because apparently he was too old for the job. “I’ll be 35 — in seven years,” he informed the crowd to roaring laughter.

Meanwhile, the value chains took a hit from Williams. “I went to Primark the other day,” he said. “The shopkeeper asks: ‘How can I help you?’ I say: ‘I’m just looking.’ ‘What are you looking for?’ ‘I’m JUST looking,’” he said, growing more desperate with every exchange, though eventually giving in to the salesman’s demands. “’I’m looking for a suit at Primark. I don’t think anybody can help me,'” he deadpanned.

The humor segued seamlessly into the clothing, which took cues from traditional sailors’ staples — “not the chic sailors, but those working at the docks,” said Hettmann, flexing his muscles to help paint a picture. The outerwear especially, including overlapping blazers, parkas and blousons, let off a workwear vibe but stayed light and approachable via handsome cotton-linen blends and maritime prints. (Cue black ship’s cats and cartoon killer sharks.) Naval embroideries, meanwhile, reminiscent of Hokusai woodblock prints, imbued the lineup with an arty feel.

Among the highlights was a new knit the duo designed in collaboration with Woolmark, which looked like denim, but was not, and helped a bulky T to an ultrasoft touch, while in another instance a pair of baggy “jeans” was in fact pure linen with a charmingly crinkled surface — as if the sea salt had altered its texture.