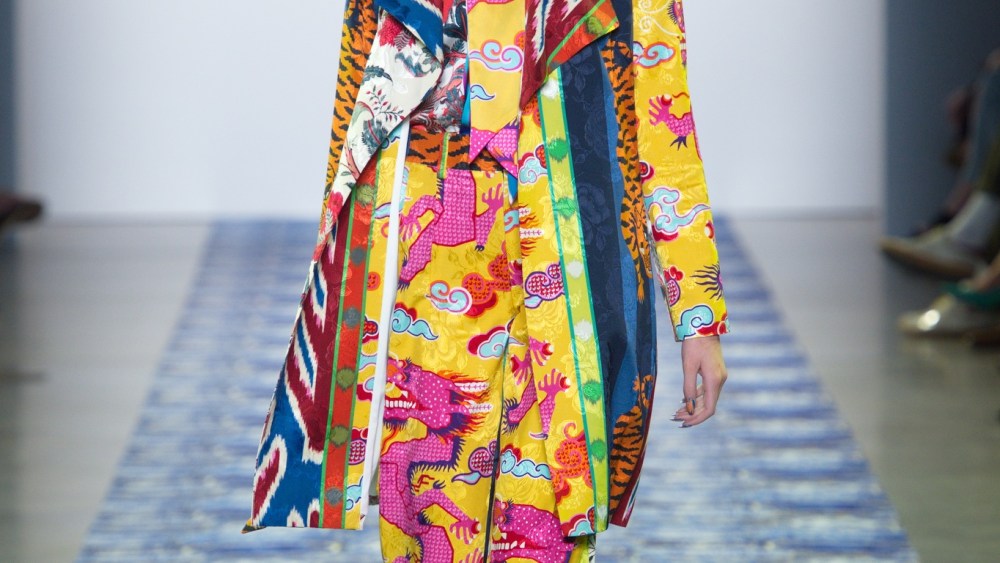 Libertine returned to New York Fashion Week on Wednesday to present its collaboration with Schumacher to an audience that included Thom Browne, Hamish Bowles, Paris Hilton, Patrick Starr and others.

Designer Johnson Hartig designed fabrics, trim and wall coverings for the home fabrics and wallpaper company, which launched on the Schumacher web site this month, and the runway show featured looks made with the bright and intricate prints. “We do these really exorbitant, lush prints every season so it was a continuation of that,” said Hartig following the Libertine runway show.

Hartig worked with Schumacher creative director Dara Caponigro on the 2017 book, “The Authentics.” The designer was one of many people featured in the tome along with actress Peggy Lipton and interior designer Miles Redd. “We became familiar then and just a couple years later they approached me about doing the collection for them,” he said.

Schumacher marks its 130th year in business this year. Two years ago, the company entered into a licensing partnership with Vogue to produce a collection inspired by the Vogue archive. The family-owned company has also worked with Elsa Schiaperelli and Karl Lagerfeld.

Libertine’s collection for Schumacher includes dragon prints, Renaissance art drawings, a Ming-era ginger jar-inspired pattern, trompe l’oeil, ikat based on an antique Uzbek document and Tibetan tiger motif on velvet, all of which appeared on the runway as a combo pattern on a women’s tunic, one-shouldered dress and long skirt and men’s suit and long shirt. The designs also showed up as individual patterns on a women’s blazer with wrap closure and matching pants, sporty men’s bomber jacket and shorts, and velvet coats.

Additional patterns that made their debut only in the ready-to-wear collection include floral patterns on white suits and tie-dye, and crystals on a shawl-lapel wrap suit in nude, Riddler-inspired question marks, and colorful arrangements.

Libertine held its fall 2019 show and its Jimi Hendrix collaboration in Hartig’s home city of Los Angeles in April to guests such as Marilyn Manson, Fergie, Malin Åkerman and Dita Von Teese among others. Hartig said about the move that he had “been feeling bored with New York Fashion Week for a few seasons” and when asked how he feels about his return, said, “I feel like I’m never going to do another show again. I’m back here nearly having a stroke and I think is it really worth it? So this may have been it. It’s a lot of stress doing these, I’m too old for it.”