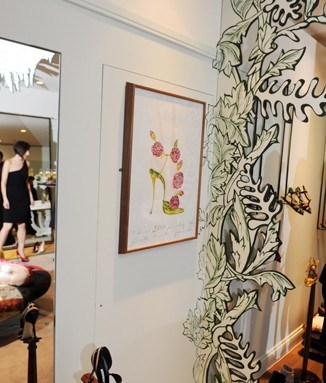 PRINTS CHARMING: “Ever since I was a boy, I’ve had a thing about Liberty – I’ve always been in love with this building,” said Manolo Blahnik during a cocktail Tuesday night to fete the opening of his pop-up shop at the Tudor revival flagship on Great Marlborough Street.

In between autographing the soles of shoes and chatting with guests – including Meg Matthews, Bianca Jagger, Yasmin Mills, and Lara Bohinc – Blahnik admitted that being a fashion icon isn’t exactly a picnic.

“I was dealing with 60 emails a day for this project – it was one tough summer!” he said. Liberty’s managing director Ed Burstell, who hosted the party with British Harper’s Bazaar, agreed: “We were speaking 12 times a week at least – and sometimes it was 12 times a day,” he said.

Manolo’s niece and collaborator Kristina Blahnik, an architect, said she took the pop-up shop – Manolo’s biggest single project to date – in her stride. “Architecture is about 10 percent design, and 90 percent management. And it all moves so slowly,” she said.
“Fashion’s much easier to deal with.”

The World of Manolo will open for business on Friday and operate until Christmas. The designer chose 12 Liberty prints for nine limited-edition shoe designs, and created new, shoe-inspired prints for other merchandise including handkerchiefs, notepads, umbrellas, and silk scarves.

Liberty has also filled its windows with Blahnik’s designs. After the cocktail at the store guests were ferried to the Soho Hotel to watch one of Blahnik’s favorite films, Luchino
Visconti’s “Senso,” about the occupation of Venice by the Austrians,
intertwined with a love story.