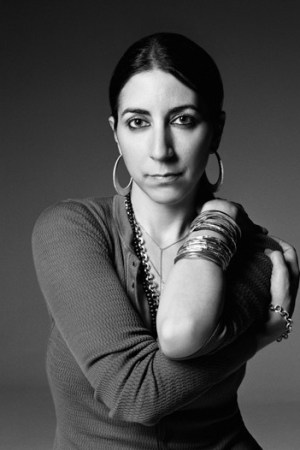 NEW YORK — Andrea Lieberman feels like she has just given birth two times.

Not only did the celebrity stylist become a mother for the first time three months ago, but she also just launched a fashion collection of her own, called A.L.C. — for Andrea Lieberman Collection.

“I thought life was chaotic before, but now it’s completely chaotic,” the personable designer said, sitting in her West 36th Street showroom.

In the past decade, the New York native became a household name in fashion and entertainment, styling such celebrities as Jennifer Lopez and Gwen Stefani, whose L.A.M.B. line she also consults on.

While her reputation was built on being a stylist, Lieberman said that she was always a designer first and only “fell” into styling. After studying fashion at what was then known as Parsons School of Design, she spent a year in Paris, and two more in Africa.

“I was really into tribal jewelry, and after I returned, I opened a store called Culture & Reality,” Lieberman recalled. “And around that time, I got into styling, which catapulted me into the world of music and celebrity.

“For me, styling was a great creative outlet, because I had the great fortune of working with people who in effect became my muse, and I was able to help them with their image,” said Lieberman, who will continue to style.

Her first fashion line for spring has clothes for the kind of life she leads — cool, stylish, always on the go and suitable for any location.

Lieberman, who also designs a jewelry collection for Mouawad, included such looks as a T-shirt dress draped like a traditional Indian sari, a floor-length T-shirt dress with leather piping and a neckline adorned with beads and leather paillettes, a short cotton dress with wide macrame halters, a georgette army parka and tailored, slim pants.

Asked for her inspirations, Lieberman said, “I look up to everybody that I have worked with over the last 10 years. I also love cinema, particularly Italian cinema — directors like [Luchino] Visconti, and women like Monica Vitti, Jane Birkin and Romy Schneider. I am also very inspired by my travels. I have always been inspired by Africa in a textural way.”

The collection is positioned between top level contemporary and entry-level designer, with wholesale price points ranging from about $150 to $395, though some of the more elaborate pieces can go up to $600.

The line is represented by the 10 Eleven Showroom in Los Angeles, which also has locations in New York and Dallas. “We are in the business of doing business, so this will not be a small launch,” said Betsee Eisenberg, the showroom’s owner, who declined to give sales projections for the line.