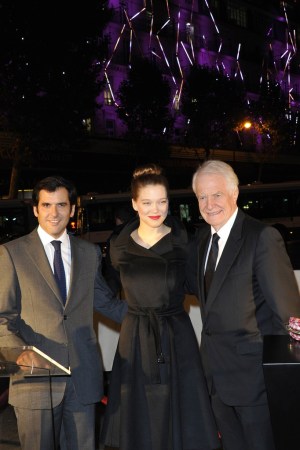 FAIRY TALES: Léa Seydoux put down her gingham-print Prada clutch — and limbered up her fingers — for the task at hand: pushing the big button to light up the Galeries Lafayette flagship on Boulevard Haussmann in Paris.

The Wednesday night event helped kick off the holiday shopping period in France — and draw attention to “La belle & la bête,” the latest screen adaptation of the “Beauty and the Beast” fairy tale starring Seydoux and Vincent Cassel. It’s due in French theaters in February.

As a lattice of lights pulsed over the massive building, Seydoux was trailed by a clutch of paparazzi as she inspected store windows devoted to the forthcoming film and others depicting typical Christmas scenes inhabited by animated dolls and forest creatures.

Galeries Lafayette also unveiled its 65-foot Christmas tree, perched under its famous cupola. Done in collaboration with Swatch, it features a toy village at the base that springs to life on the hour, every hour.

Next door on Thursday evening, Gwyneth Paltrow pulled a red cord to reveal the Prada-themed windows at Printemps’ flagship.

The Milanese fashion house’s signature teddy bears danced and pranced in a winter wonderland theme. In another window, they skied, while one vitrine featured a couple of fir trees that spun to reveal Prada outfits.

“For us, Christmas is the key moment of the year, and we want to make a statement for Paris, for France and for the world,” said Paolo de Cesare, Printemps chairman and chief executive officer. “We wanted to find somebody that inspires, somebody that can partner with us, somebody that can push and exceed what we think is possible. This collaboration with Prada has done all of this and more.”

Miuccia Prada made a brief appearance at the event.