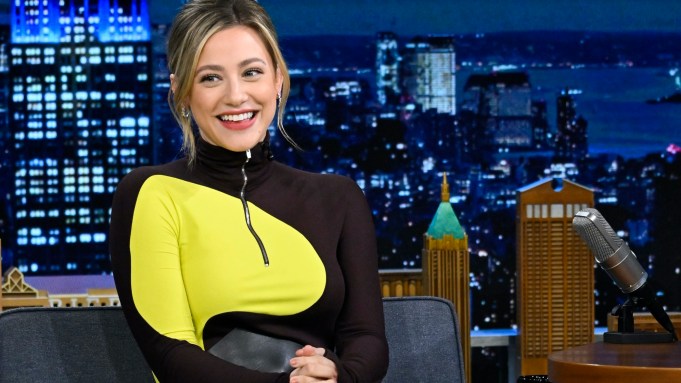 Lili Reinhart had a standout fashion moment during her appearance on “The Tonight Show Starring Jimmy Fallon.”

On Tuesday, the actress appeared on the television show wearing a neon yellow and black color-blocked long-sleeved dress by Tory Burch paired with a black leather asymmetric statement belt, black leather boots and jewelry by Luisa Alexander. She styled her hair in a low bun, leaving two strands of hair to frame her face, and kept her makeup simple.

She was styled by Mimi Cuttrell, who also works with the likes of Ariana Grande, Gigi Hadid and Madelyn Cline.

During her segment Jimmy Fallon, poked fun at Reinhart’s love for Mountain Dew, particularly referencing a tweet she wrote during Coachella in April, saying: “Where can I get a Mountain Dew at Coachella?”

The two proceeded to try a variety of products inspired by the soda, including an ice cream, a lip balm and a Mountain Dew Flaming Hot drink.

“I do. I love to be in control of things,” she responded. “It’s better to have the executive producer title otherwise you’re just like a bossy actor, rather than, ‘No, no, I have this title, I’m allowed to make these decisions.’ So, it makes me feel good, yeah.”

The film follows a young woman named Natalie whose life diverges into two parallel realities on the eve of her college graduation. One takes a look at what happens when she pursues a career in Los Angeles while the other sees her navigate motherhood in her hometown in Texas.