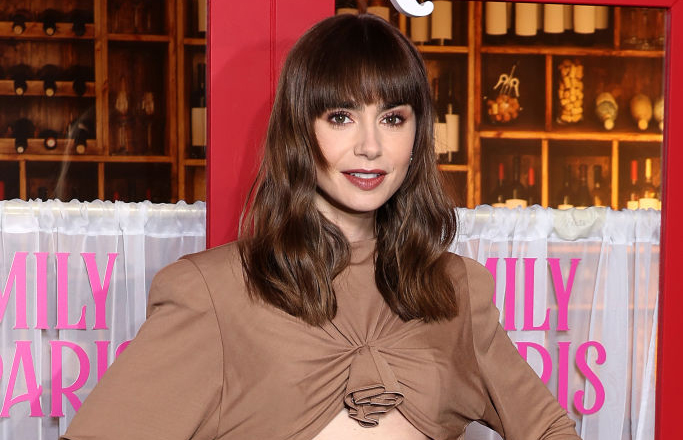 Lily Collins arrived at the “Emily in Paris” season three premiere in Paris on Tuesday in a striking light brown Saint Laurent gown, which included dramatic draping throughout.

The dress had a mock neckline and a series of cutouts on the bodice, adorned with a twist of the fabric including a tie around her waist. The skirt featured heavy draping and ruching, with tassel-like ties in the center leading to a pool-like train around her feet.

Collins was styled by Rob Zangardi, who has also worked with Gwen Stefani, Camila Cabello and Jennifer Lopez.

Collins wore her hair wavy with bangs. She opted for a brown-themed makeup look, with a matte brown lip and a touch of brown smoky eye shadow.

Collins was joined by her costars, including Ashley Park, Lucas Bravo, Lucien Laviscount and Camille Razat.

On Monday, it was announced that luxury shoe brand Malone Souliers partnered with the Netflix series on a capsule collection inspired by the “Emily in Paris” characters, including Collins.

Collins currently stars as Emily in the Netflix series “Emily in Paris,” the third season of which is set to debut on the streaming platform on Dec. 21.

The star continues to make strides in entertainment, fashion and beauty. To the Time 100 Next Gala in October, Collins wore a red Ralph Lauren gown, which featured bright red sequins. Last April, it was revealed that Collins was the latest brand ambassador of hair care brand Living Proof, and appeared in the brands “We Have Haircare Down to a Science” campaign.