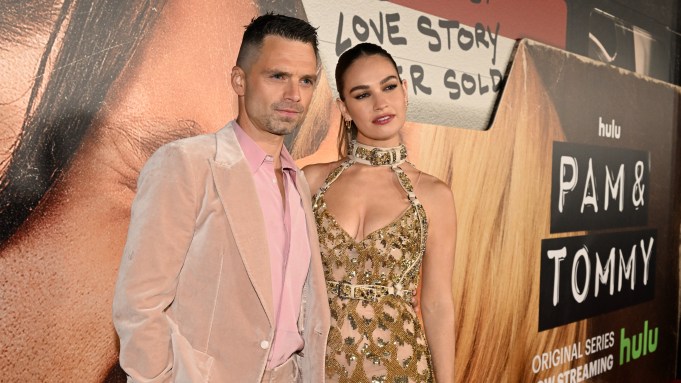 James and Stan were joined by their costar Seth Rogen on the red carpet, who wore a burnt orange suit.

This is the second red carpet event the series has hosted. For its initial premiere on Jan. 25, James and Stan came together on the red carpet in another set of high-fashion looks, with James wearing a pink cutout blazer jacket over a bustier-style cutout dress from Versace’s fall 2021 couture collection and Stan wearing a gray-blue suit from Sandro Paris.

One of the year’s most anticipated TV shows, “Pam & Tommy” is a dramatized version of the marriage between actress Pamela Anderson and Mötley Crüe drummer Tommy Lee and the unauthorized release of their sex tape.

When set photos were released, fans were quick to note James and Stan’s uncanny resemblance to the original figures. Both stars had a daily four-hour transformation process that consisted of hair, makeup and prosthetics. James, for one, sported a forehead prosthetic to change the placement of her hairline to resemble Anderson more accurately.

While Anderson and Lee themselves were not involved in the making of the series, Anderson announced last week that she is working with Netflix to tell her real story in a new documentary. A release date for the project has not yet been announced.

Anderson and Lee were married in 1995 after knowing each other for a short period and quickly became one of the most well-known celebrity couples of the 1990s. They share two sons, Brandon Tomas and Dylan Jagger Lee, and ultimately divorced in 1998.

The “Pam & Tommy” series finale is now available to stream on Hulu.