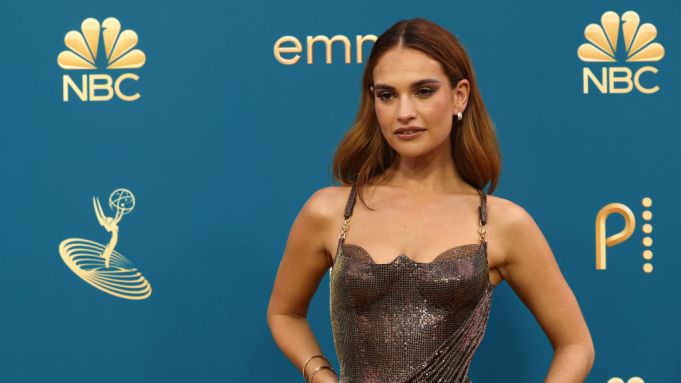 Lily James had a sparkling moment as she walked the carpet at the Microsoft Theater on Monday in Los Angeles for the 2022 Emmy Awards.

The actress wore a bronze metal mesh dress by Versace Atelier. The design featured ruched details and gold accents on the straps. James paired the gown with brown strappy heels.

The shimmering effect continued with her accessorizes by De Beers Jewellers, including thin bracelets, earrings and rings.

The look was brought together by stylist Rebecca Corbin-Murray, who has worked with Simone Ashley, Florence Pugh and Gemma Chan.

James kept her hair down in soft waves and her makeup matched her dress with a bronze eye look and a nude lip.

The 2022 Emmy Awards honor the best performances and programs in television. “Saturday Night Live” cast member Kenan Thompson hosted the event at the Microsoft Theater in Los Angeles. HBO’s “Succession” is leading the nominations with 25 nods, followed by “Ted Lasso” (20), “The White Lotus” (20), “Hacks” (17) and “Only Murders in the Building” (17). The Geena Davis Institute on Gender in Media was also presented with the Governors Award in recognition of their work to promote gender balance in the entertainment industry.