The line, which will launch this summer, is being created by MGO, a brand portfolio company whose chief creative officer is Ginny Hilfiger.

The Argentine athlete, who captains both FC Barcelona and the Argentina national team, has partnered with MGO, a brand portfolio company whose chief creative officer is Tommy Hilfiger’s sister, Ginny Hilfiger, to create Messi.

The premium lifestyle brand with “a sporty edge” will be primarily men’s wear but will include a few women’s tops as well, according to Hilfiger.

The line will launch in July on a global e-commerce site called The Messi Store that will offer teasers of product. A full rollout will begin in August.

Hilfiger said new product will be released each week, but on a limited basis to create “a get-it-before-it’s-gone tactic,” she said. If some pieces become staples, they will be produced in larger quantities.

Hilfiger said there will also be some items in the mix that will be autographed by Messi “so the lucky customer will get a signed Leo piece,” she said.

In mid-September, the brand will partner with Savile Row tailor Richard James as well as the English shoe brand Tricker’s for a small capsule that will be offered at Santa Eulalia, a high-end specialty store in Barcelona that was established in 1843.

The Messi x Richard James tailored clothing offering will also be offered in a shop in London Persona, a brand and store created by one of MGO’s partners, Julian Groves. The clothing collection will also only be available in limited quantities.

Tmall, the Chinese online site, will also launch a Messi “store” this fall, she said.

Hilfiger said the idea of creating a collection with Messi started with MGO’s chief executive officer, Maximiliano Ojeda, who is Argentine and grew up following the sport. “Leo is the greatest football player in the world and still has a lot of years left to play,” she said. “Also he is recognized globally by all types of people even people who don’t watch football.” 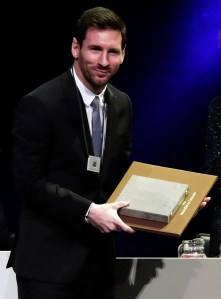 Hilfiger said despite his fame and wealth, Messi “is a really humble, generous and kind person and a great role model. He has been involved since we started talking to the Messi family two-and-a-half years ago when we presented the idea to them. His sister, who he is very close to, is part of our team as a liaison helping us know what he likes and doesn’t like and working with us in Argentina and Barcelona. She will be working with us in New York, too.”

Messi, 31, is widely viewed as one of the greatest soccer players of all time. He has spent his entire professional career with Barcelona, where he has won a record of 34 trophies. He has a net worth of around $400 million and nearly 120 million followers on Instagram. He’s also known for his philanthropic work. He partnered with UNICEF and has also created the Leo Messi Foundation, which supports access to health care, education and sport for children.

Ashlyn Harris on Fashion, the World Cup, Equality — and Marriage