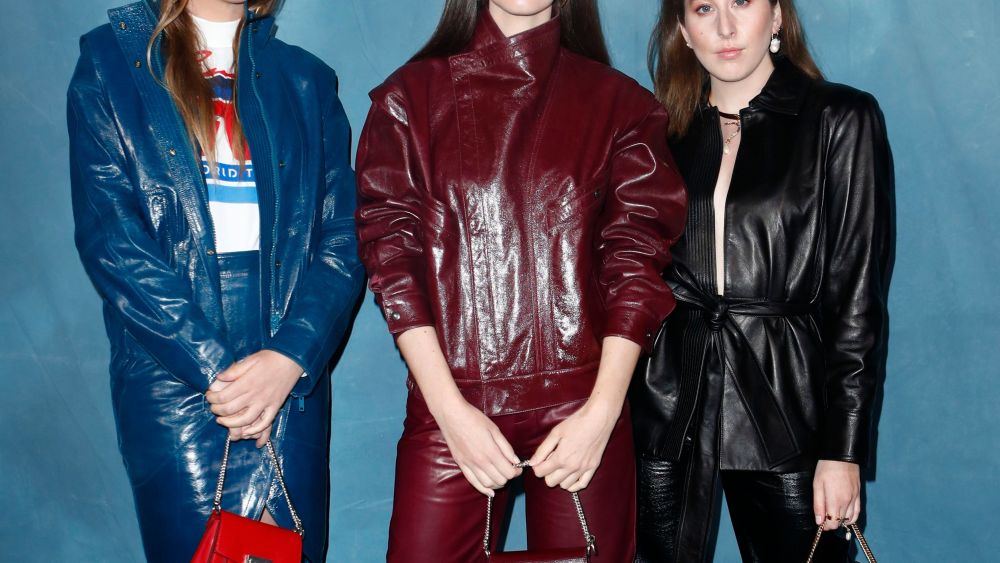 DARK THOUGHTS: Guests flowing into the Givenchy show on Sunday night at the majestic Palais de Justice were plunged into darkness, with only a beam — dust twinkling in its light — leading them down an infinite stone corridor to the show venue.

Aaron Taylor-Johnson, who swept in with his director wife, Sam, who just presented “A Million Little Pieces” at the Toronto Film Festival, her second film in which he stars, said he found it very atmospheric. “Beautiful, with the big illuminated Givenchy sign outside,” he said.

“Oh my gosh, you don’t see things like this in L.A.,” enthused Alana Haim, making her way down the corridor with her musician sisters, Danielle and Este. “No,” they chorused when asked if they were scared of ghosts. “We grew up with ghosts, our house was haunted,” said Haim, adding: “I think it was a she, because she would steal all my favorite possessions. Like, ‘Where’s my grandma’s amazing ring?’” she said. “Then a week later it would be back on my table. The ghost just wanted to wear it for a week, she had great style.”

“I love ghosts, I’ve never met one, but I know plenty of people who have and I believe them,” said Liv Tyler who had never been to the historic venue. “I would have loved to have seen it in the daylight,” lamented the actress who just wrapped filming the period drama series “Harlots.” “I’m also a bit blind without my glasses,” she added, cautiously making her way down the corridor.

After the show, a bedazzled Anne Hathaway, who had just attended the HeForShe Impact Summit in New York, organized by UN Women for which she is a goodwill ambassador, said the experience entering the venue had made her think about “light and prismic colors — and all of that was in the show.”