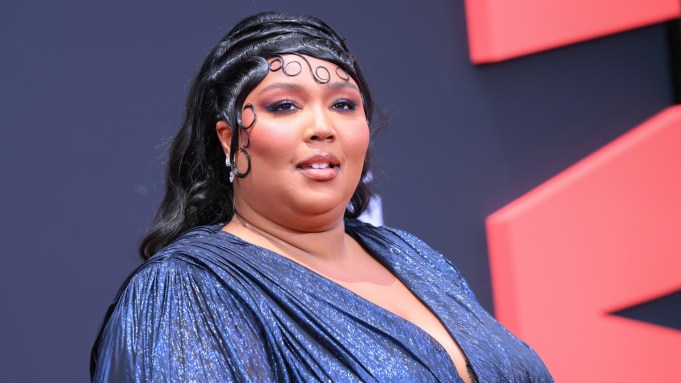 Lizzo updated classic old Hollywood glam for her latest red carpet appearance, wearing a gown reminiscent of a 1920s feather robe to the 2022 BET Awards in Los Angeles on Sunday.

To attend the annual celebration of Black talent and culture, Lizzo — who was styled by Jason Rembert — wore a draped Gucci gown made of deep navy shimmer fabric trimmed in wispy black feathers. The dress featured a plunging neckline partially trimmed in black lace, which dove into a ruched sash-like midsection wrapped around the torso. Lizzo’s semi-sheer skirt featured a high slit extending to the left hip, which showed off the singer’s towering black peep-toe Gucci platform heels with an ankle strap. Adding to the retro glamour inspiration, Lizzo’s statement bell sleeves and floor-sweeping hem were both trimmed in black feathers.

The star wore her hair down her back, adding slicked finger waves at the crown of her head decorated with delicately swirled baby hairs. The intricate hairstyle showed off Lizzo’s swirled crystal statement earrings. Her makeup was centered around a bronzed lip, blushed cheeks, and a smoked-out charcoal-rimmed eye.

Lizzo isn’t a nominee at the 2022 BET Awards, as she hasn’t released an album since 2019. Her upcoming album “Special,” which features the hit song “About Damn Time,” is set to release on July 15, and will be eligible for the awards show next year. Lizzo is, however, set to perform at the 2022 BET Awards.