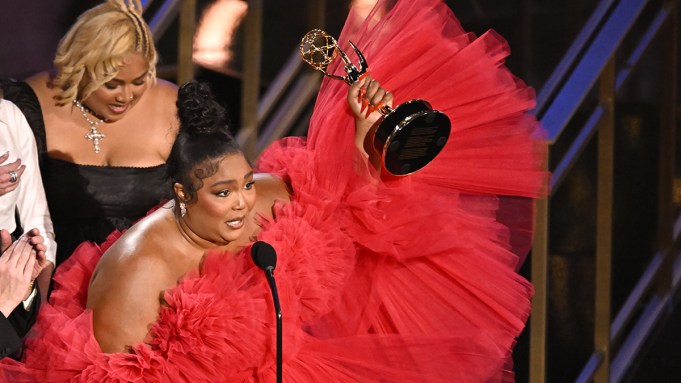 Lizzo made a vibrant debut at the 74th annual Emmy Awards on Monday in Los Angeles. The musician was nominated for her Amazon Prime Video show “Lizzo’s Watch Out For The Big Grrrls,” which she executive produces. She won an Emmy for Outstanding Competition Program.

Alietté founder Jason Rembert styled Lizzo for the event and has worked with Mary J. Blige, Issa Rae, Taraji P. Henson and Muni Long. Lizzo tapped Rembert to style her for the cover of her fourth studio album, “Special” and this year’s BET Awards, where she wore a custom blue Gucci gown. At the 2022 MTV Video Music Awards, she arrived on the carpet in a similar-hued Glenn Martens for Jean Paul Gaultier ensemble.

The 2022 Emmy Awards honor the best performances and programs in television. “Saturday Night Live” cast member Kenan Thompson hosted the event at the Microsoft Theater in Los Angeles. HBO’s “Succession” is leading the nominations with 25 nods, followed by “Ted Lasso” (20), “The White Lotus” (20), “Hacks” (17) and “Only Murders in the Building” (17). The Geena Davis Institute on Gender in Media will also be presented with the Governors Award in recognition of their work to promote gender balance in the entertainment industry.