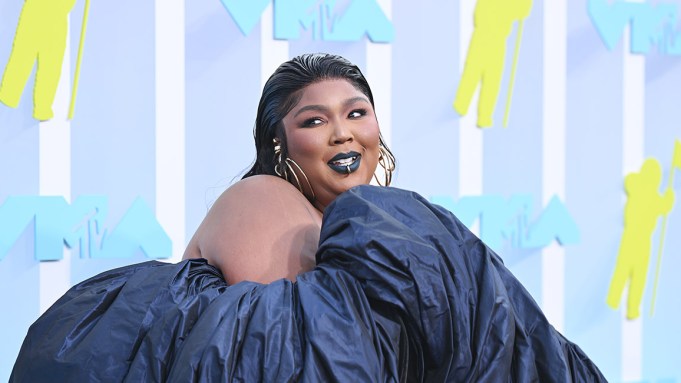 Lizzo made a dramatic style statement on Sunday in Newark, N.J., at the MTV Video Music Awards.

The hitmaker, who was nominated for four awards, arrived on the red carpet in a royal blue gown by Glenn Martens for Jean Paul Gaultier. The voluminous spring 2022 dress is from Diesel creative director Glenn Martens’ guest design debut as part of Gaultier’s Haute Couture collection.

Lizzo accessorized with gold hoops, cuffs and rings by Jennifer Fisher and sheer Lael Osness opera gloves. For footwear, she chose black boots with an elevated sole and a silver buckle.

Her look for the ceremony was styled by Brett Alan Nelson, who has worked with Doja Cat, Karol G, Bebe Rexha, and Noah Cyrus. Nelson previously styled Lizzo for her “Rumors” music video featuring Cardi B, which saw her in a number of halcyon looks.

Her hairstylist Shelbeniece Swain went for a slicked back, wet appearance. Lizzo’s glam by Alexx Mayo featured a smoky eye with blended tinges of pink, brown and black, completing the beauty routine with a coral blue lip.