The campaign was styled by Caroline Issa. 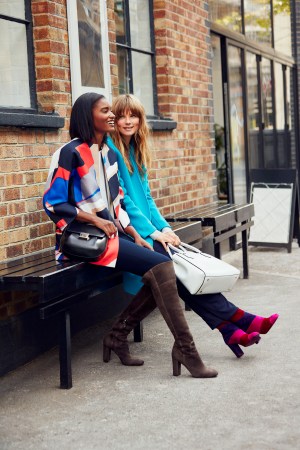 Schuman and Issa had previously worked together on the label’s fall 2015 campaign, while Issa had also partnered with the British contemporary label to design a capsule collection in 2013.

Shot on the streets of East London, where L.K. Bennett’s head offices have moved from their previous Mayfair location, the campaign aims to capture the more effortless aesthetic that defines the British capital’s East End.

“For our second season working together, we wanted to build on the energy from the fall campaign and express an urban-chic aesthetic that is specific to London,” said Issa.

The models are pictured strolling among the brick buildings in the area, wearing the brand’s Seventies-inspired collection that includes block heels, patchwork ankle boots and espadrilles.

The apparel featured in the campaign includes the label’s signature workwear offering, such as a white tailored suit, culottes and striped shirtdresses, as well as brighter, printed midiskirts and blazers, which were inspired by the abstract paintings of artist Sonia Delaunay.

“There is something uniquely English about the way with which they approach fashion at L.K. Bennett, and in this campaign, together, we try to put ease back into elegance,” said Issa.