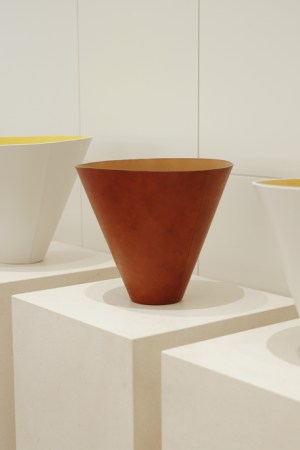 IMG Requires Proof of Vaccine to Attend NYFW: The Shows at Spring Studios

BOWLED OVER: “It’s not always just about bags: There’s other ways to talk to customers,” designer Jonathan Anderson mused Tuesday night in Paris as he hosted a party at the Loewe boutique on Avenue Montaigne to show off a series of leather bowls.

“It’s important we keep doing things that show off the craft we have, and that craft can be modern,” he said, stroking the wood-grain patina achieved on a small, pinched vessel.

Jewelry designer Elie Top and fashion curator Pamela Golbin were among those who sipped mohitos and roamed the boutique, which Anderson described as a “work in progress.” The entrance gallery now features a giant photo of model Julia Nobis, who seemed to stare down at the crowd and a hulking table set with the bowls, many of which resembled vases for flowers — though they’re not really intended for that use.

“You can put water in them, but not for too long,” Anderson said with a chuckle.