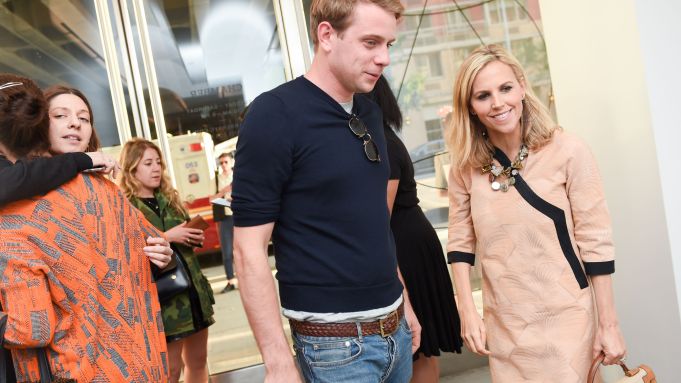 CRAFT MAGIC: Jonathan Anderson continued the tour of the Loewe Foundation Craft Prize exhibition in New York on Thursday. The exhibit started in April in Madrid with a showcase of the 26 finalists of the 4,000 applicants for the inaugural edition of the Craft Prize and is now in New York at the Chamber Gallery through June 6.

“I’ve wanted to do this project since I joined Loewe,” said Anderson, who’s also shooting his Loewe campaign while he’s in town. “It’s really important to support craftspeople like this.” The lineup featured work from various disciplines: Pottery by Sangwoo Kim of South Korea, gold and silversmithing by Robert Baines of Australia, lacquering by Igawa Takeshi of Japan, embroidery by Leo Chiachio and Daniel Giannone of Buenos Aires, weaving by Anne Low of Vancouver, with whom Anderson is collaborating on an upcoming project, and the winning work of wood carving by Ernst Gamperl of Munich, Germany.

Gamperl’s piece, called “Tree of Life 2,” is a large wooden vase carved from a 300-year-old oak tree uprooted during a storm. “I plan to make a collection out of it and to keep all the objects together,” he said. “In two or three years it will be realized with the help of the Loewe Prize.”

The exhibition will travel to Tokyo next in November and London in February 2018, where the next edition of the Craft Prize will be decided.