The show, which took place on Monday night, was organized into six acts and featured collections from 46 students. 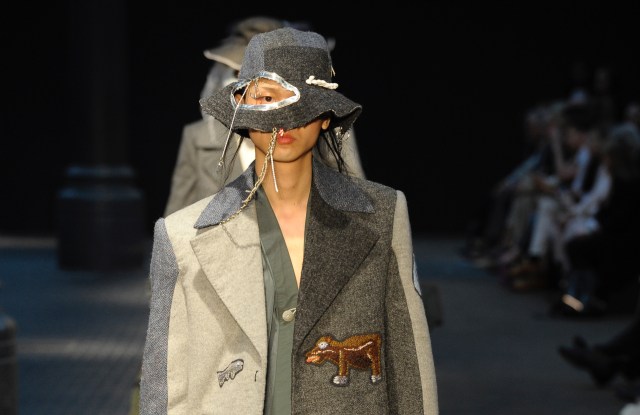 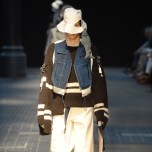 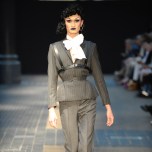 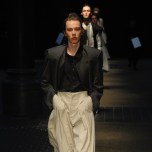 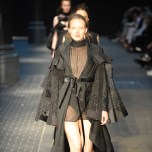 LONDON — London College of Fashion, UAL staged the graduate show of its B.A. students in a collaborative format in East London at the school’s new show venue in Old Spitalfields Market.

The show, which took place on Monday night, was organized into six acts and featured collections from 46 students studying footwear, accessories, jewelry, sportswear, photography, styling, women’s wear and men’s wear. Looks ranged from the abstract to the theatrical.

Bespoke tailoring student Will Morgan and fashion jewelry student Simpson Ma kicked off the show with a cool lineup that took its cue from fishermen and folklore. Using secondhand fabrics such as French linen tablecloths, 19th-century indigo Japanese futon covers and technical knits, the duo showed a long tailored patchwork coat in various shades of gray and blue, with hand-embroidered appliqués.

This was worn over workman-style trousers. They layered a cropped denim vest over an oversize brown knit sweater and wide-leg cream trousers. Both looks were topped off with a deconstructed bucket hat.

Bespoke tailoring student Jack Goode and fashion bags and accessories student Ismail Laraqui looked to gender-fluidity for a pinstripe tailored coat that was nipped at the waist and paired with skinny gray trousers. The look was styled with a soft white pussybow tie and a mini leather harness worn across the chest.

Meanwhile, costume for performance student Sarah Louise Hardwick fashioned her idea of a gothic female character using leather, animal scales and feathers. She closed the show with a well-constructed theatrical look using gold and black feathers that covered the bodice and arms, while gilded scales were applied on legs.