Designer takes up challenge of creating a collection in an hour. 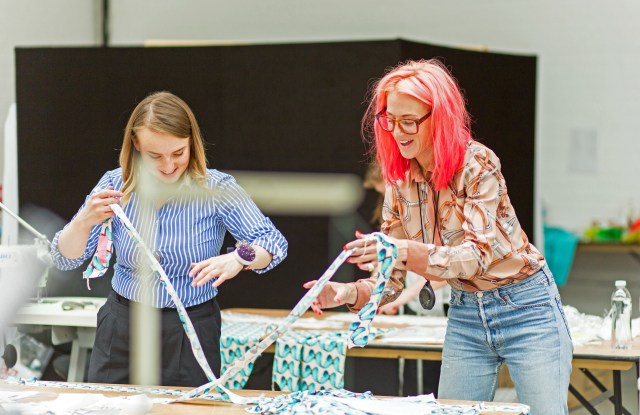 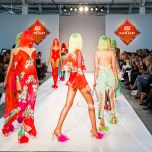 PLAYING CHICKEN: KFC has recruited edgy London men’s wear designer Katie Eary in its mission to demonstrate how much can be done in a lunch hour.

As part of the fast food brand’s #PackMoreIntoLunch campaign, KFC challenged Eary to create a capsule women’s wear collection for spring 2016 in 60 minutes.

On the day of the challenge, 25 machinists sewed like crazy to create 13 looks, worn by 10 models in a catwalk show at the Old Truman Brewery in London.

The collection, like the playful and irreverent men’s wear Eary is known for, was brightly colored, with a palette rooted in fluorescent orange and green.

Butterflies were the print motif, superimposed over hypersized KFC chickens — it shouldn’t have worked but it did. Floaty silk chiffon minidresses and cropped tops came with a lovely ostrich feather trim in neon green.

A red bias-cut slipdress that reached just above the ankles managed to be sexy and sophisticated, while the twist-front swimsuits had definite commercial appeal.

Of course, some preparations had been made. The collection had been finalized two weeks before: All the patterns had been made, and almost everything had been pre-cut for the 60-minute sew-a-thon.

There was a rawness to some looks that probably wasn’t intentional, and one sensed the presence of double-sided tape holding some pieces together.

“I am trained to make sure that everything is perfect before it goes on the runway, so it was really hard for me to see things that weren’t quite 100 percent done lining up for the catwalk,” Eary said.

The designer had been approached by KFC to promote its new Ricebox lunches, which contain fewer than 500 calories. “It was fun to work on women’s wear for a change,” she said.

In addition to creating the capsule collection, Eary also designed a limited-edition sleeve for Ricebox, which will be available at select KFC stores, for one day only, on Sept. 18.