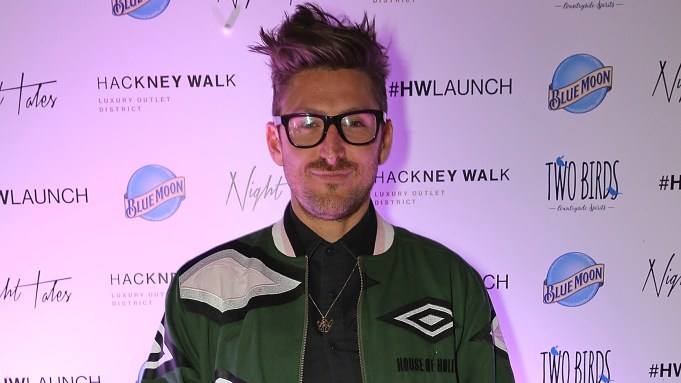 Hackney Walk is the first designer fashion outlet in the British capital and is located on Morning Lane. Brands including the retailer Matchesfashion.com and Nike have joined Burberry, Aquascutum, Bally, Anya Hindmarch, Joseph and Pringle of Scotland, which were already part of an existing structure. Others who have joined in include Uggs, Gieves & Hawkes Colombo, and Present. Folli Follie will open in the coming months.

The Stitch Academy, a platform that offers free talks and master classes, hosted a pop-up-shop on Thursday night, with apparel and accessories from a range of designers including Sibling, James Long, Holly Fulton and Piers Atkinson.

Long queues formed for street food stations from Hackney’s local eateries including Tonkotsu East, Legs, Yard Sale Pizza, and F.A.T. while guests nibbled on tacos, pizza and ramen. They listened to tunes chosen by Williams with DJs Loren, Tim and Barry, Mischa Mafia and Stu Hammond on the decks.

Raeburn, who recently moved his studio from Poplar and Limehouse to Burberry’s old textile factory in Hackney, said he’s excited about the neighborhood. “It’s 2,500 square feet and we’re looking to do retail, showrooms — the full shebang,” he said. “It’s a purpose-built, architect-designed space, but it obviously has real soul to it.”

Holland, who took part in a Q&A event for Stitch Academy last month, was initially doubtful of the new complex, but had a change of heart and noted his interest in moving into the new space.

“I think, like many people, I was quite skeptical before it actually materialized in terms of attracting these kinds of stores and brands to this area and it being kind of a legitimate shopping hub,” Holland said.

“But then they’ve completely pulled it out of the bag. It’s really impressive. I’m actually excited to see who else comes in next because I know the plans they have for the next 10 years are enormous. It’s going be insane here. It’s going be the new Bicester,” he said, referring to the luxury shopping village in Oxfordshire, owned by Value Retail.

“We’re actually talking to them about putting in some workspace as a part of it as well,” added Holland. “So we might move our studio to be part of the whole thing.”

Holland, who was wearing a green jacket from his collaboration with sportswear label Umbro, revealed his plans to team up again for a women’s range. “We’re expanding that into women’s yoga and fitness for next spring,” said Holland. “So that’s a new category for us and a new collaboration. I think Umbro is one of the last remaining sports brands that’s been adopted by the street culture, but no one’s done anything with it on a fashion level.”

Atkinson, a British milliner who’s also involved with the Stitch Academy, finds Hackney Walk an exciting and big change for the area.

“Mary Benson, Sibling, James Long and Holly Fulton and I are all involved in this project with the Stitch Academy,” Atkinson told WWD. “It really builds bridges between the fashion industry in Hackney, which is very strong, and local talent as well as the people who live in and love Hackney.”

“Most of the stores here are outlets so it’s a nice way for local people or anyone to access a more reasonable priced fashion,” added Atkinson. “It also brings people from outside London or outside the U.K. into this area. And when people come here they’re going to buy a coffee, or buy a sandwich, or go and see a film, or go and see an exhibition, so it will bring a finance into the area which is what makes the world go round.”

The milliner will be hosting his first on schedule presentation during London Fashion week on Sept. 17.

Hackney Walk plans to host a range of pop-up concepts and a space for a designer in residence. NewGen designer Ashley Williams is the first designer to take part.

Many London designers have their studios based in Hackney, including Henry Holland of House of Holland, Simone Rocha, Christopher Kane, Jonathan Anderson, James Long and Holly Fulton and House of Hackney.