The label will present at Coterie this weekend. 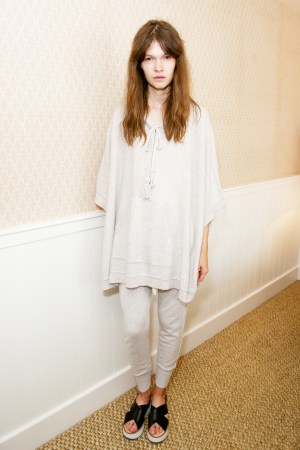 LOMA’S KNITS BRANCH OUT: London knitwear label Loma, which is showing its spring 2016 collection at Coterie this weekend, already counts Nordstrom, Ron Herman and Neiman Marcus among its U.S. stockists, and will launch in Saks Fifth Avenue in October.

Now founder Lorna Masters, who started the label in 2012, plans to expand closer to her home turf. “When I started the range I was living in Australia and that’s why it resonated so well, especially in California, because the lifestyles are very similar,” said Masters, a Royal College of Art graduate who designed for Nicole Farhi and French Connection before starting her own label. “California is a great market for knitwear because they don’t wear coats.”

The label has recently launched at The Shop at Bluebird and Harvey Nichols in London, and Masters said that now the label plans to expand into the U.K. and Europe, having recently appointed a German sales agent, U. Schramm-Badenhop. She will also present the collection during Tranoi in Paris in October, and is considering a presentation in London.

The label is focused on fine cashmere knits, in what Masters called “architectural” shapes. “I’ve always liked the idea of a bohemian look but done in a very clean way,” she said, during a preview of the spring collection in London. Among the designs are cashmere hoodies edged with a sporty nylon trim; slim track pants in cashmere; skinny rib sweaters in silk cashmere and fine cotton sweaters. Prices for the line start at around $200 for a linen or cotton piece, and rise to $600 for a cashmere car coat. The average price point is $395 for a cashmere sweater.

As for future plans, Masters said she’s plotting to expand the knits into a ready-to-wear range, including pieces in leathers and silks. “It seems to be a natural progression,” she said.