Collection will launch at Boutique One in June.

By Stephanie Hirschmiller on May 13, 2016
View Slideshow 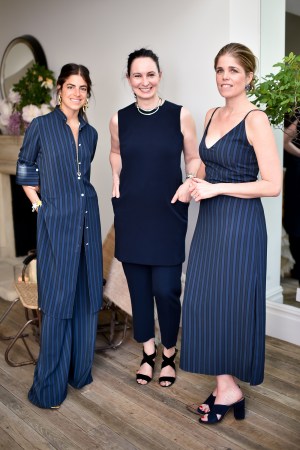 MEDINE MARKS THE SPOT: “My impetus is always very selfish; I think ‘What can I create that doesn’t exist but I wish it did?’” said Leandra Medine at a dinner in London to mark the launch next month of the capsule collection, Atea Oceanie x Man Repeller.

Laura Myers, creative director of Atea Oceanie, hosted the dinner at her Belgravia home for the limited-edition capsule line that will launch in late June at the yet-to-open Boutique 1 in London’s Chelsea.

Medine, who has previously collaborated with brands including Nina Ricci, Dannijo, Michael Kors and Stuart Weitzman, discovered Atea Oceanie in New York and was instantly hooked. “It’s the exact form of luxury basic that every woman needs,” she said.

Myers had seen Medine styling the pieces on her Man Repeller blog, and was intrigued.

“She was styling our pieces in a really inspired way that I would never have dreamed of doing – so I’ve enjoyed being daring and taking some risks,” said Myers of the collaboration.

The duo declined to reveal specific details about the new line, other than the fact that Atea Oceanie x Man Repeller will debut for pre-fall at Boutique 1 from June 20.

Medine is not stopping with Atea. Her debut footwear line – in collaboration with a yet-to-be-named e-commerce brand – will debut for fall.

Also in attendance was the women’s wear designer Charlie May who revealed that she’s launching men’s wear for spring/summer 2017.

“There was already a crossover,” she said, “my girlfriends always tell me their boyfriends wear my pieces too.”

Jewelry designer Jordan Askill, arrived at the dinner fresh from Coachella where he’d been supporting his videographer brother Daniel who had created films to accompany Sia’s headline performance.

He’s also at work on his new collection. “It’s based on another endangered species,” was all he would say. His latest outing focused on the panther and the Canadian flower Viola Canadensis.