Could Sir Paul Smith have the solution to London's dirty streets... Christina Aguilera must really like jeweler Stephen Webster... 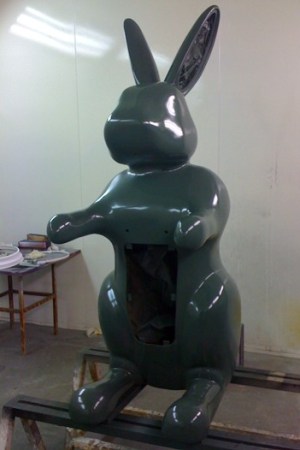 A LOAD OF RUBBISH: Could Sir Paul Smith have the solution to London’s dirty streets problem? The designer, known for his whimsy and wit, has created a rubbish bin — in the shape of a rabbit with flashing ears — that will be unveiled today. The five-foot-high bunny, whose color is British racing green, holds a wastepaper bag, and every time a bystander tosses in a piece of litter, the big ears light up and sparkle. Smith created the bins as part of the upcoming Super Contemporary Commissions show at London’s Design Museum, and his bin will stand alongside pieces by 15 designers including Ron Arad, Tom Dixon and Thomas Heatherwick. “In any city, there are always so many things you love and so many things you don’t, and so many things you want to improve,” said Smith. “My exhibit is hopefully a tiny step towards making people be better with their rubbish.” The show at the Design Museum runs from June 3 until Oct. 4, and the bins will be installed for public use in the Covent Garden and Holland Park neighborhoods. Meanwhile, Wayne and Gerardine Hemingway have created a pop-up shop for emerging designers as part of the Design Museum show. They are inviting designers to sell their creations rent free from July 2 to Sept. 2, outside London’s city hall.

VIVA LA AGUILERA: Christina Aguilera must really like jeweler Stephen Webster. The singer — who made her first post-baby performance at a party in Las Vegas for Webster last year — is coming back to Sin City on Friday night to host yet another fete for her friend at Tao. “As a fellow artist, I’m always inspired by the jewelry Stephen creates each season,” said Aguilera, who features in the brand’s ad campaign. “I’m in awe of the intricacies of his designs, and while each collection evolves from the last, he always stays true to his signature glam-rock style.” Webster, who launched his new Jewels Verne collection at Baselworld in April, will display the collection at the Couture fine jewelry trade show, which begins today at the Wynn Resort.

PEDAL POWER: Fendi’s Karl Lagerfeld isn’t the only one raising the typical two-wheeler to designer status. Elie Tahari is teaming up with California-based manufacturer Phat Cycles on a limited edition bike for the summer. The Elie Tahari Main Street Bicycle takes its name from the address of the firm’s East Hampton boutique, where the $900 bike will debut exclusively in June and feature an exclusive leopard print from the designer’s fall 2009 collection as well as handlebars and a dual spring saddle covered in his signature camel-colored leather. The Elie Tahari logo, meanwhile, is embossed on the chain stay. “Bicycles have always been an essential part of summer for my family and me,” Tahari noted. His destination of choice? Bridgehampton’s Ocean Road bike path, a stone’s throw from his home in Sagaponack.