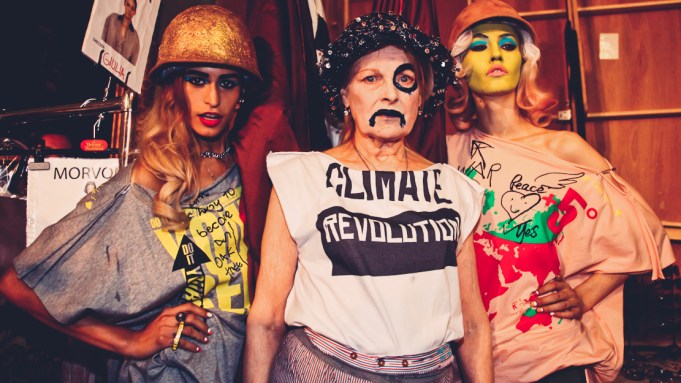 LONDON — London’s Fashion and Textile Museum is following the trail of the T-shirt with a new show called “T-shirt: Cult — Culture — Subversion,” which delves into the evolution of the garment over the past 50 years, as well as its creation through embroidery, printing and silk-screen techniques.

The exhibition features more than 100 pieces from artists, collectors and designers and points to the T-shirt’s role as a platform for musical, political and social messages. Highlights include pieces by Vivienne Westwood and Malcolm McLaren, Katharine Hamnett, Dior, Moschino and Henry Holland.

“The earliest discussions were around a large private collection of Westwood T-shirts, and the exhibition grew from there to encompass a range of ideas. It poses questions around the T-shirt as opposed to presenting a history of this basic garment,” Nothdruft said.

There is Westwood and McLaren’s “Cambridge Rapist” T-shirt from 1977, a symbol of the punk era that referenced the criminal who stalked the university campus in the early Seventies. Other Westwood items on display include slogan T-shirts such as “Climate Revolution” and “Save the Arctic.”

Hamnett, who was also famous for her politically charged Ts, has items on display including “Stay Alive in ’85” and “No More Page Three,” referring to the campaign to stop the use of topless models in The Sun newspaper.

Band T-shirts including ones from The Rolling Stones, The Velvet Underground and The Ramones are also on show. There is also an area that highlights how the shirt has worked for the LGBT+ community. There are Gay Pride T-shirts, and a timeline of campaigns for equal rights. Moschino’s T-shirt dress addresses recycling and the Dior “We Should All Be Feminists” T-shirt has its place in the show, too.

The exhibition features objects from many lenders, including designers, graphic designers and private collectors, said Nothdruft.

“I think the T-shirt has democratized ideas of what fashion could be,” said Nothdruft. “I think it now raises questions about sustainability and ethics, which many designers and companies are starting to address. Some, like Katharine Hamnett, were early adopters and pushed for change and others have yet to really engage, but the movement is there. It is a testament to the power of a very simple piece of clothing.”

The show runs until May 6.