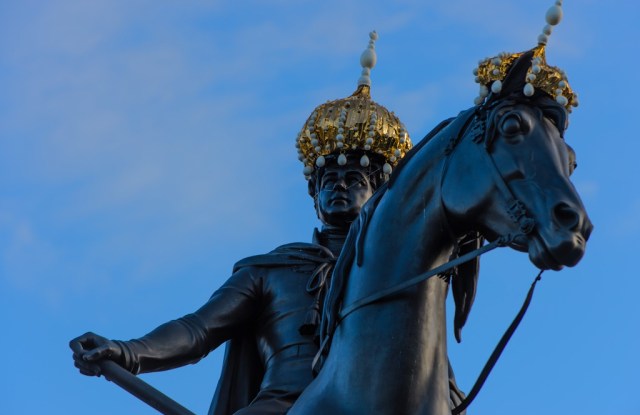 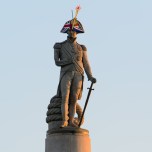 HATS OFF: For the next four days, some of London’s best-known statues will be sporting a new look.

As part of the London 2012 Festival, a series of cultural events that runs alongside the Olympics, the Mayor of London, Grazia magazine and the British Fashion Council have commissioned 21 milliners to create hats for 20 of London’s statues. The project, called Hatwalk, launched in Trafalgar Square this morning.

In the square, the statue of King George IV on horseback is wearing a Mughal-inspired, pearl-encrusted gold crown designed by Stephen Jones — as is his horse — while the statue of Admiral Nelson atop Nelson’s Column wears a bicorn hat emblazoned with the Union Jack, with an Olympic torch fixed at its peak. Nelson’s creation was made by Locke & Co., the firm that designed the admiral’s original bicorn hat.

Jones, who co-curated the project, said the hats were all subjected to rigorous tests to ensure that they can survive London’s elements. “They were put in a wind tunnel and tested to see if they were fire-proof, in case they were struck by lightning,” said Jones, who explained that the initiative aimed to capture a sense of “Britishness.” “What I love [about the project] is, as the opening of the Olympics captured that feeling of classicism and craziness and eccentricity, which is such a British thing, that’s what hats do in general but these do in particular.”

The show also spotlights the work of milliners including Philip Treacy, Justin Smith Esquire, Pip Hackett and Charlie Le Mindu, whose creations dress London statues stretching from the city’s Bloomsbury area to its financial district. The hats are on display through to Thursday, and then they will be auctioned to raise money for the London Mayor’s Fund.