Longchamp opened its biggest flagship in Asia and its second biggest store in the world with a party in Hong Kong. 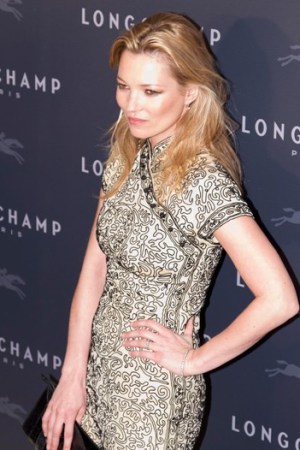 LONGCHAMP’S LUCKY NUMBER: Longchamp opened its biggest flagship in Asia and its second biggest store in the world with a party in Hong Kong that drew hundreds of socialites and celebrities, including Kate Moss. The model, wearing a black and white cheongsam and carrying a clutch from the Kate Moss for Longchamp spring collection, posed gamely for throngs of photographers before being whisked into a secluded VIP room.

Along with multiple generations of his family, Longchamp chief executive officer Jean Cassegrain was on hand to welcome such guests as David Tang and jewelry designer Michelle Ong Cheung. Legendary Hong Kong actress Carina Lau also attended, although the thick crowd of revelers meant she showed up in the store 10 minutes after she was introduced. The 3,100-square-foot store, dubbed La Maison 8, boasts a lucky-number address and was designed by American architect Eric Carlson of Carbondale. For the opening, Longchamp introduced a commemorative handbag that pays tribute to Hong Kong. “We’ve been in Hong Kong almost 60 years,” said Cassegrain, adding, “We opened our first flagship here too, in 1979 — even before Paris.”

This story first appeared in the March 30, 2011 issue of WWD. Subscribe Today.

GOING RETAIL: Weatherproof will open its first store this summer, a pop-up shop in New York City for its 32 Degrees Heat brand. No site has been located yet, but the company is looking for around 2,500 square feet in either Union Square or on the Upper West Side, according to Freddie Stollmack, president of the outerwear firm. The shop will sell men’s and women’s outerwear, sportswear and activewear items from the 32 Degrees label, which is a performance-driven brand that is among the fastest growing categories in the company. “We see this as a brand-building device that will add credibility to the line,” Stollmack said. If reaction to the store is strong, it may become permanent. “If it goes well, who knows?” he said.

NOT PLEASED: In response to the ousting of creative director Cédric Charlier from Cacharel, revealed Monday, Massimo Ferretti, executive chairman of the French brand’s licensee, Aeffe SpA, expressed his utter discontent with the decision. “I was extremely surprised and saddened to hear about the decision regarding Charlier. The decision, made by Jean Bousquet, is one that I absolutely disagree with because I have always valued Charlier’s talent and felt he brought good results to the company,” said Ferretti.

BIGGER DIGS: Coast has cleared its namesake. Having outgrown its South Beach hotel venue, the five-year-old trade show relocated to the mainland Design District’s Moore Building, beginning with a two-day event this week. Eighty booths with 300 lines filled the hip, historic property’s four floors, which surround a dramatic atrium. Amenities like manicure stations, a cafe and a coffee bar energized every level. “Retailers were pleased with the booth’s festive format, since many were intimidated to enter hotel suites,” said founder Karen Bennett, who saw interest from buyers across the U.S. Repeat brands like Tibi, Twelfth Street and Thayer comprised 75 percent of exhibitors, while newcomers were Mark + James, Winter Kate and Current/Elliott. Categories expanded with resort fillers and accessories such as House of Harlow 1960 and MK Totem.

GAULTIER RISING: The only U.S. trunk show of Jean Paul Gaultier’s fall runway collection racked up $165,000 in sales at Forty Five Ten in Dallas over three days last week, according to Brian Bolke, store owner. That’s about $15,000 over Aeffe U.S.A’.s goal for the brand. Bestsellers centered on luncheon and cocktail ensembles and items, including a cashmere and fur belted wrap, $5,795; black corset belts, $1,095; a black jersey dress with a zipper at the shoulder to transform to a mini dress, $895; a funnel neck striped stretch flannel dress, $835, and a variety of jewel-tone and scarf print silk blouses, $895 and $995.

COMME AND PLAY: Rei Kawakubo is collaborating with “The Simpsons” creator Matt Groening for her Play casual line. The collection is based on Groening’s comic strip “Life in Hell,” about a demented rabbit called Binky and his ex-girlfriend Sheba. The T-shirts, in four styles, denote each character from the comic. The shirts will be available in Comme des Garçons stores in mid-May.

HOME BODY: Sonia Rykiel is bringing the house’s signatures stripes and colors to upscale French furniture brand Roche Bobois. Satin, silk and velvet cushions in a range of flower prints, including poppy and iris, are among elements of a capsule furniture line conceived by Nathalie Rykiel for Bobois, due to be released this spring.

BLACK GOLD: Giambattista Valli has a weakness for caviar, evident by one of his favorite Paris haunts: Caviar Kaspia. For its first collaboration with a designer, Kaspia tapped the Italian designer to do its spring packaging. Valli’s signature black pearl necklace is featured on the pink tin cover and box. The caviar inside, which comes from white Italian sturgeon raised near Venice, has a slight hazelnut taste. A 30-gram tin — about an ounce — sells for 57 euros, or $80.