Alexander McQueen, Marc Jacobs and Gucci were all early targets of looters, but many more were hit during a night of protesting and unrest.

Fears among retailers and brands that protests in Los Angeles over the police killing of George Floyd would devolve into looting have been realized in many areas.

On Saturday evening, around 6 p.m., an Alexander McQueen store on Rodeo Drive in Beverly Hills was broken into and looted, according to live video aired by a local CBS station. Dozens of mainly young men streamed into the McQueen store after the glass of its doorway was broken. A large display window was tagged with “Make America Pay.” The store had not been boarded up like most of its neighbors had earlier in the day. Some that entered the store ran out with handfuls of merchandise and handbags.

Not long before, the Gucci store on rodeo was tagged with “Eat the rich” and people managed to breach its blue plywood barricade, starting to break the glass facade behind, but left when police started to run over. Dozens of police, many in riot gear, were present in and around the Rodeo area since early afternoon as protests in L.A. began to grow and move west from the Fairfax/Grove area of L.A.. The police did not attempt to stop the looting of the McQueen store. 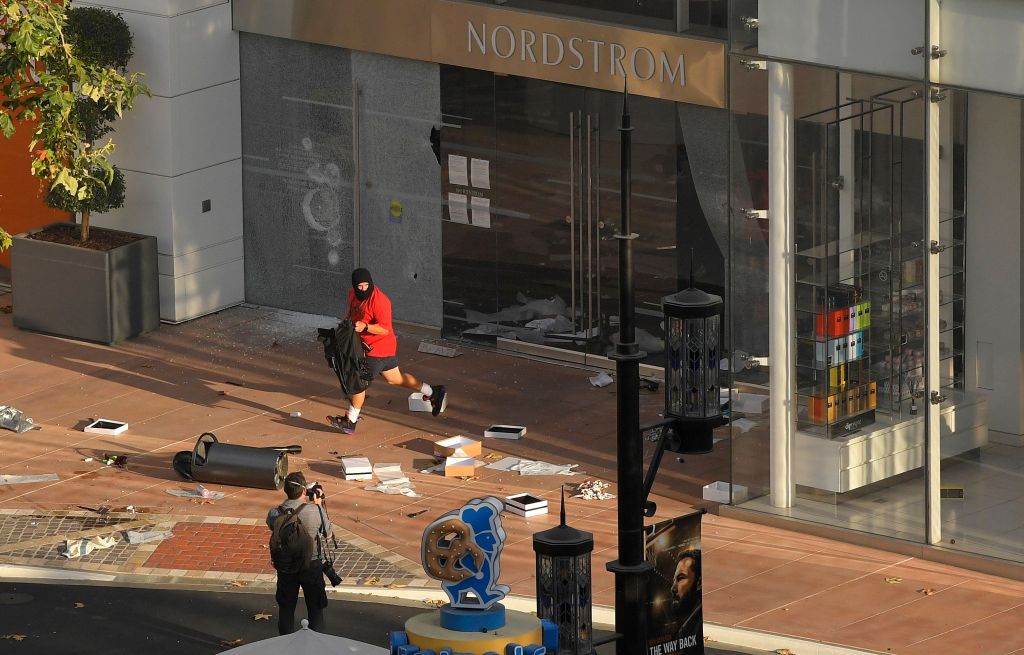 The Nordstrom in The Grove shopping center was broken into from a rear entrance.  Mark J Terrill/AP/Shutterstock

As of 6:30 p.m., the CBS station was showing video of a Nordstrom department store within The Grove shopping center that had its rear entrance broken into, allowing the looting of merchandise to begin. The Apple store in the Grove was also broken into and looted, as was a Ray-Ban store.

The Marc Jacobs on Melrose Ave. had also been breached by this time, with its glass door shattered. The store had not barricaded its windows, but from video on social media it appears the store was cleared of any available merchandise. Unbroken glass on the store’s window read “F*** capitalism.” The large placard reading Marc Jacobs at the entrance had the names George Floyd and Sandra Bland added to it. Floyd was killed Monday by a police officer while being arrested in Minneapolis for a nonviolent crime, sparking the current wave of protests in the U.S. Bland was found hanged in a jail cell in Texas in 2015 after being detained by police during a traffic stop. 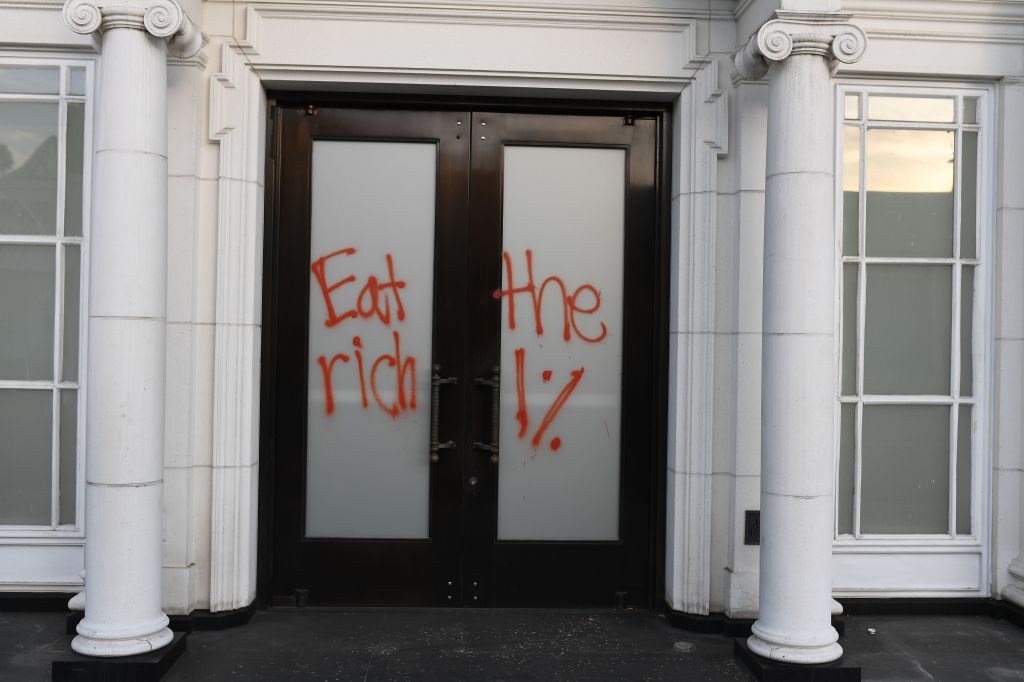 Graffiti on a closed store on Rodeo Drive in Los Angeles amid protesting.  Michael Buckner/Variety/Shutterstock

Just before 8 p.m., Flight Club, a popular sneaker store on Fairfax with many expensive pairs, had its metal gate broken through and was quickly looted of merchandise. Dozens of people went in empty-handed and came out with display sneakers, which the store typically shrink wraps, and all the boxes they could carry. Numerous shoe boxes could be seen strewn on the sidewalk and the street in front of the store as looters went through merchandise and some even filled cars with boxes of shoes. Police did not intervene as looters went in repeatedly.

By 9 p.m. more stores were being looted, including an Adidas Originals location on Melrose, which also had a metal gate lifted, its glass door broken and saw most of its merchandise taken, and a nearby Urban Outfitters. Also on Melrose in West Hollywood The Real Real’s location was broken into and looted. A trio of small retail establishments on Melrose were also set on fire: Tony K. a shoe store, Reloaded, an apparel store, and a Dr. Martens store. A Target store in the Fairfax neighborhood was also being looted by this time.

Shortly before 7 p.m. L.A. instituted a city-wide curfew of 8 p.m. as the protests became increasingly chaotic. Shortly before, the gathering in front of The Grove was officially deemed unlawful by police, leading to a number of arrests. Overnight on Thursday, when protests in L.A. were concentrated in the Downtown area, police reportedly arrested around 500 people. 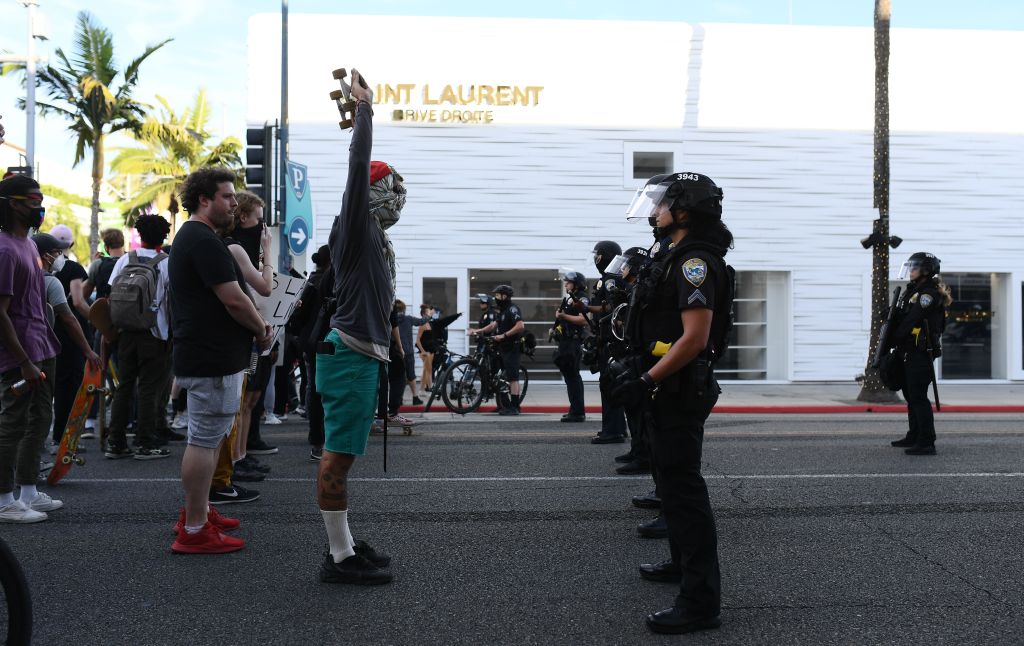 “This is no longer protest, this is destruction,” L.A. Mayor Eric Garcetti said on Saturday night. But the curfew did little to deter all people and protestors, thousands of which were still out on the streets of L.A. as 8 p.m. approached. L.A. police said later Saturday evening that it had mobilized the entire police force, close to 10,000 officers. This is the first time the entire police force has been mobilized since 1994, when severe earthquakes hit the San Fernando Valley region of L.A. County.

By 8:30 p.m., California Governor Gavin Newsom approved the state’s National Guard to come to L.A. and assist the police. They are expected to arrive in the city by midnight.

The California National Guard is being deployed to Los Angeles overnight to support our local response to maintain peace and safety on the streets of our city.

This is the third night of protesting in L.A., which has been predominately peaceful. Other cities across the U.S. are seeing protests as well, including Seattle, Portland, Nashville, Washington D.C., Philadelphia Atlanta, Tampa, Brooklyn and Minneapolis, the city where George Floyd was killed.