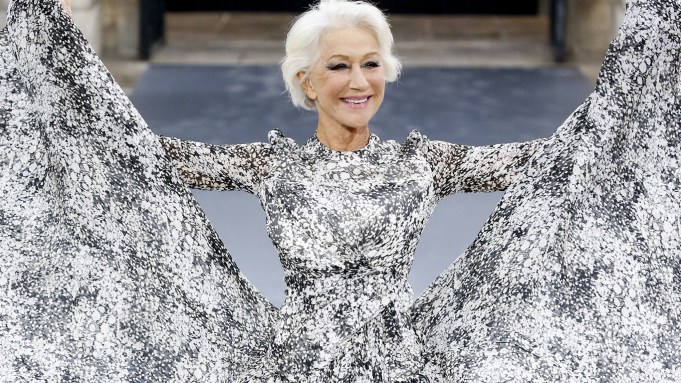 “I’m terrified of falling down,” the actress told WWD backstage before the event, which took place Saturday evening at the majestic Paris Mint. Her fear was shared with Amber Heard, a first-timer there.

Andie MacDowell and Eva Longoria were among the star-studded cast taking part in the show, L’Oréal Paris’ third, that was set to original music performed live by a 40-piece orchestra.

The catwalk display began with a drumroll. Six-hundred guests, with Naomi Campbell, Olga Kurylenko and Louise Bourgoin sitting in the front row, waited for 32 of the brand’s ambassadors to make their entrances on the circular stage.

But before that began, some shared with WWD their thoughts on dreams, reality and sustainability.

Mirren, whose recent projects include HBO’s “Catherine the Great” and “The Good Liar,” said: “I’m wearing this gorgeous Giambattista Valli dress. It’s very, very floaty — lots of stuff to get tangled in and fall over.”

She drew parallels between runway and stage work. “It is theater,” she said. “I’m a theater girl. I want to be on stage.”

Mirren loves the backstage fashion-show experience, having lived it now twice with L’Oréal Paris. “It’s all chaos, and yet somehow they make sense of it, and then you line up and they go ‘OK, go,’” she said. “They walk out and look so calm the models, don’t they?”

With sustainability in fashion and beauty among the hot topics today, Mirren was keen to share tips.

“The greatest contribution I’ve made to the planet is by not having any children, actually,” she said. “Not that I’m proselytizing that people should not have children, because I have fabulous children in my life and I would be devastated to be without them, but there are too many people in the world, and we are in serious danger of destroying our planet.”

Mirren disapproves of “throwaway fashion.” “I really think that’s a terrible trend, to buy something to wear once and throw away,” the actress continued. “I’ve always bought clothes at thrift stores and recycled fashion, because I like it. I like old things.”

MacDowell gives away belongings to sisters or friends. “Anything I’ve ever bought I’ve always shared,” she said. “My daughters have some of my old clothes that I bought even 30 years ago.”

The actress is in a recently released movie, called “Ready or Not.” She’s also wrapped “No Man’s Land,” with Frank Grillo, and has a trip in the works. “I’ve had a dream for 30 years to go to India,” said MacDowell. She will attend a film festival there, in Kolkata.

MacDowell believes her fascination with India began as a yogi. “It’s a really spiritual place. I feel that people make transformations when they go to India,” she said.

Back to acting, MacDowell is interested in working on a TV show that resonates with people. “Somebody else can be the big star. I just want to have a complex character,” she said. “The great thing about television now is that it’s such an artistic medium that in a lot of ways is difficult to re-create in film.”

MacDowell had walked the L’Oréal Paris show in 2018. “It was really fun,” she said. “Last year, I heard one of the young girls naïvely say something about mature women being a trend. I don’t think she really understood what she was saying, because that makes us sound so marginalized — that we could be a trend.

“Mature women are the biggest consumers in America,” said MacDowell. “Baby Boomers are the largest number of people, and we need to be represented.”

MacDowell has met with some modeling agencies while in Paris. “I find it interesting now, more than ever, the idea of modeling,” she said. “Because I think it is important to have mature women represented in fashion. And I love fashion. In a way, I have come full circle. It’s where I began, and it’s re-creating myself in my 60s. It’s something that would be a pleasure, a great joy.”

Longoria, who praised the inclusive nature of the L’Oréal show, also had recycling in mind. “I try to recycle as many looks as possible. I donate a lot of my clothes to consignment stores that will resell them,” she said, admitting that since directing more, she has less need of multiple clothing changes for work.

“I wear the same thing a lot,” she said. “But in our industry, that whole [idea that] you only wear one gown once and nobody else can wear it again is crazy.”

Longoria’s latest project is a movie for Fox Searchlight. “It’s about the guy who created the Flamin’ Hot Cheeto,” she explained. “He was the janitor at Frito-Lay, in the factory, and he came up with this product. It’s the number-one product. It saved the company, and he couldn’t even read or write when he started [there].”

Bringing stories of popular heroes to the forefront through her work is a passion project for Longoria. “I’d love to see Rita Hayworth’s movie come to fruition. I’d love to see Maria Félix’s — not that I’d want to act in them, but [to] be able to produce them, so that people understand these Latin icons that really paved the way for a lot of people,” she said.

Heard said she’s prepping to shoot Josh Boone’s miniseries adaption of Stephen King’s novel “The Stand” in Canada soon. “I’m really excited to start that. I’m a mega-nerd about Stephen King,” said the actress, who is also working on several advocacy projects she’s passionate about, notably as an ambassador for the Cyber Civil Rights Initiative and the American Civil Liberties Union.

Heard is trying to change how she consumes, buying responsibly and working “with brands and movements that don’t just stand for selling, but stand for the environment, the people to whom they’re selling and the generations that follow.”

That was a view shared by Aja Naomi King. “It’s so lovely to see a shift now, even with larger brands like H&M moving in a more sustainable direction and taking note about how people feel about not only the environment, but working conditions for people and wanting to make sure the things we incorporate in our daily lives are not things that are going to bring any harm to others,” she said.

King is on screens with the final season of “How to Get Away With Murder,” wrapping the hit show after six years, and looks forward to the upcoming release of Kevin Willmott’s “The 24th.”

Ethical fashion has always been a priority for Liya Kebede. Her Lemlem brand, founded nearly 14 years ago, was built around fair trade practices, employing artisans in Ethiopia to manufacture its products. “You are creating a cycle of someone actually being able to get out of poverty by themselves because they’ve learned a skill,” said the model and entrepreneur.

Sustainability is important to Soo Joo Park, too. “I use wash cloths to wipe off all my makeup first, then use reusable cotton wipes to wash it off after,” she said. “I try not to purchase too many things, as well.”

Although she couldn’t reveal any upcoming modeling jobs, Park said having recently worked on creating a Karl Lagerfeld tribute shirt was exciting. “I got to show something more creative and artistic, beyond what I do as a model,” she said.

Being good to the planet has been on L’Oréal Paris global makeup director Val Garland’s mind, too. “That’s why I have quite a few clothes that I’ve been wearing for like 20 years,” she said. “If I think it’s good, I stick with it. Buy quality, buy less.”

For one of the makeup looks of the show, Garland was using biodegradable glitter.

“Overall, my inspiration was all things Parisian,” she said of the color-cosmetics looks for the show. “It was like,how can we take the idea of the elegant, chic Parisian and just amp it up a notch. So, as always, it will be about great, beautiful skin. Sometimes it will be a simple makeup, sometimes something a bit more graphic.”

Lancien focused on creating looks that naturally worked with the women walking the show’s inherent beauty.

Delphine Viguier-Hovasse, L’Oréal Paris’ global brand president, explained that the fashion show “is the best way for us to carry the message and sense of purpose of the brand, which is women’s empowerment.” She called L’Oréal Paris spokeswomen “women…of diversity, who have a lot of different journeys, histories, origins and horizons.”

Viguier-Hovasse added that the fashion show allows the brand to be shared around the world. Broadcast live via Instagram in more than 40 countries, she expected it to be seen by between two and three billion people before the end of Saturday.

On the runway, the models-for-a-day looked to be having a ball. Mirren ran onstage barefoot, minimizing the risk of stumbling, while Longoria walked on with a conductor’s baton, directing musicians from center stage, before carrying her baby son Santiago on for the finale.

Among the fashion brands’ fall 2019 creations sported on the runway were Atlein, Balmain, Elie Saab, Études, Karl Lagerfeld and Koché.

The prior two L’Oréal Paris fashion shows were held on the Seine river and the Avenue des Champs-Élysées.