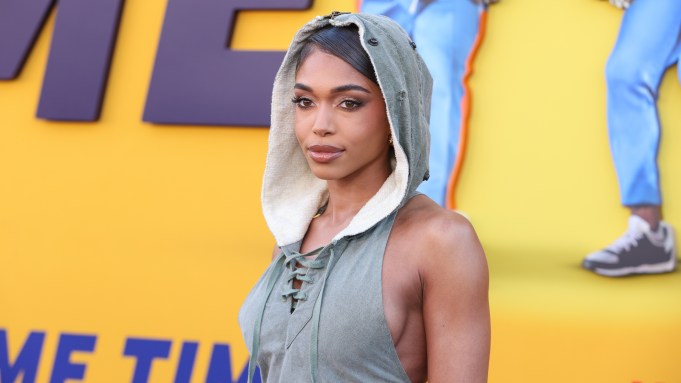 Lori Harvey had a standout fashion moment at the premiere of “Me Time.”

On Tuesday, the model-entrepreneur stepped out on the red carpet of the Regency Village Theatre in Los Angeles wearing a hooded gray dress by Greg Lauren from the label’s spring 2015 collection. She paired the look with heels by Femme LA, gold hoops and gold bangles. She styled her hair in a low bun and kept her makeup simple with a bold eye.

She was styled by Elly Karamoh, who also works with Steve Harvey, who is Lori Harvey’s stepfather, and Tyler Perry.

Harvey attended the premiere along with the main cast of the upcoming Netflix comedy, which releases Aug. 26. Other celebrity guests included Regina Hall, Kevin Hart, Mark Wahlberg, Jimmy O. Yang and Luis Gerardo Méndez, among others.

“Me Time” tells the story of a stay-at-home dad who finally has some “me time” when his wife and kids are away. He decides to reconnect with his former best friend for a wild weekend, though things take a turn for the unexpected.

As of late, Harvey has emerged as a style star, having been dressed by Karamoh and Maeve Reilly, who also works closely with Megan Fox. In June, she stepped out in a pink and orange tweed set by Chanel at the Black Beauty Roster Luncheon, where she highlighted her skin care brand Skn by LH.

Karamoh has also been the mind behind Steve Harvey’s fashion-forward street style looks, including his outfits during Paris Couture Week in July.