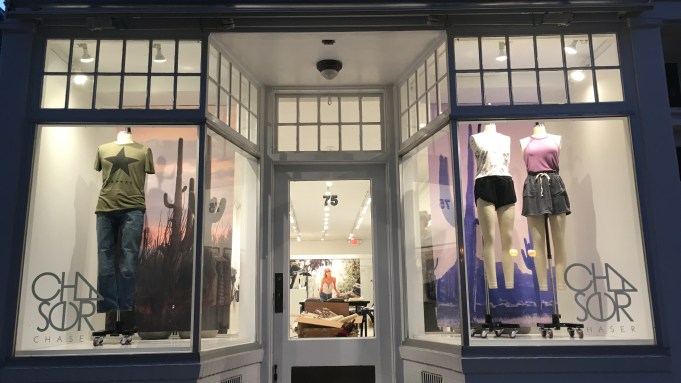 STAY A WHILE: Los Angeles contemporary line Chaser has made its way to the East Coast with a second store.

The brand — known for its extra soft, vintage-inspired rock T-shirts across men, women and kids — now sits on both coasts with the opening of its store on Main Street in East Hampton, N.Y.

“The Hamptons is one of the most gorgeous places in the whole of America. We felt it represented what the brand is about,” said owner and founder Hadi Salem. “East Hampton, for us, it felt like it was the right demographic for the brand and we thought we could do business there. In a world where not many people are opening stores, we thought, ‘OK, let’s take a chance.’”

Chaser, seen as embodying an effortless chic that has come to define many of the brands coming out of the Los Angeles area, is sold in about 800 U.S. boutiques and department stores, including Ron Robinson, Fred Segal, American Rag, Revolve, Nordstrom and Bloomingdale’s. What has set Chaser apart is its rock ‘n’ roll edge with tanks and deconstructed T-shirts featuring the Dead Kennedys, The Who and AC/DC.

Chaser has a lease on the East Hampton door, totaling about 1,400 square feet of selling space, through October but could make the stay more permanent depending on how the business fares, Salem said.

New York is just one of several markets where the brand does well, with Salem reporting sales consistent throughout the U.S.

The East Hampton opening comes just ahead of the two-year anniversary of the company’s first store on Robertson Boulevard, a door Salem said is still seeing good business. Salem, a fan of brick-and-mortar, wouldn’t be opposed to more stores in the future but that push would have to be supported by the right market fundamentals and also be in markets where the brand does not already have a large wholesale business. East Hampton is an example of a location that fit that bill, he said.

“I personally like brick-and-mortar. I think it gives us a real opportunity to engage with the customer. Obviously, you have to do it in conjunction with online,” Salem said. “The soft hand that we have can really impact customers in a store and it’s more difficult to do that online. That said, the lease rates have to come down to reality.…We have to be able to open a store, not purely for branding’s sake, but for money’s sake as well.”