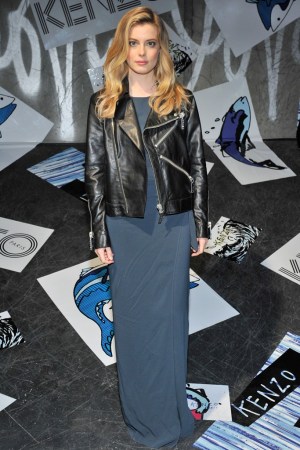 LOST IN L.A.: Google Maps and GPS’s were tested Wednesday night when partygoers attempted to locate The Berrics, the indoor skate park in downtown Los Angeles that Humberto Leon and Carol Lim chose as the venue for a dinner and after party to celebrate the launch of Kenzo’s Kalifornia bag. “We came out to an area where I felt like I was coming into a warehouse to be murdered,” said Carrie Brownstein, who set aside her “Portlandia” persona to cohost the dinner along with Gia Coppola, Rashida Jones, China Chow and Riley Keough. Other attendees included Gillian Jacobs, Miranda July, Devon Aoki, Rose McGowan, Jessica Alba and Fergie.

After recent travels had them in Shanghai, Hong Kong, Paris and New York, Lim and Leon were happy to take a breather in their native Southern California and commemorate the bag, which they spent about a year-and-a-half developing. “We were really trying to create something that would be very iconic for the brand. The brand traditionally is known as a ready-to-wear brand, and what’s exciting for us is we get to define what happens with accessories,” said Lim. Leon added, “Carol and I always talk a bag that had an ease to it. The bag has ease and function and also something that felt super Kenzo that was very recognizable.”

Each of the dinner guests had the bag hanging from their chairs to take home, but that wasn’t the only cause for excitement. Four female skateboarders — Nora Vasconcellos, Eliana Sosco, Lizzie Armanto and Vanessa Torres — showed off their skills around The Berrics and then on the dinner tables-turned-skateboard ramps. In a scary moment, one of the skateboarders took a tumble off a table. Fortunately, no one was hurt by the fall; the skateboarder quickly recovered to loud applause. Tempting as it was, Leon and Lim weren’t about to follow her in riding around the place. “I grew up trying to skateboard and getting made fun of,” said Leon. Staying on the safer side, Lim said, “I kind of stuck to roller-skating.”