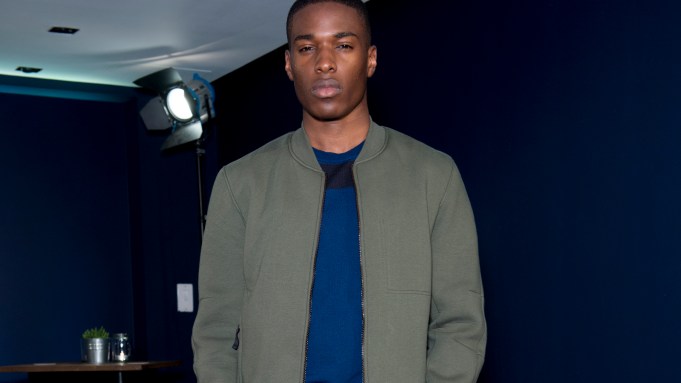 In her second collaboration for the brand, Lou Dalton once again mined Jaeger’s heritage as the official outfitter for polar explorer Sir Ernest Shackleton’s trip to Antarctica. She focused on unfussy, stylish clothes for guys on the go in another collection that is destined to be a sell-out.

As a counterpoint to Shackleton’s outdoorsy alpha male, the presentation reflected a far more quotidian scene: A bunch of snappy-looking young men were shooting pool and drinking craft beer from Brixton Brewery, as a European Championship match played on wide-screen TVs in the background.

Among the collection’s highlights was a khaki jersey bomber jacket, worn with vanilla tailored shorts and a fine blue knit.

Dalton, working with Jaeger’s head of men’s wear James Lee, also put a sophisticated spin on nylon, turning out a smart raincoats in khaki that riffed on military styling. They were layered over blue trousers and a baby pink sweater.