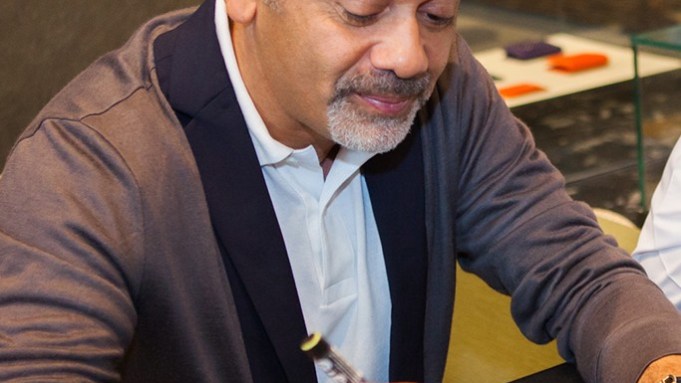 FOOTPRINTS: Taking customized sneakers to a new and cheeky place, Christian Louboutin took a marker to a pair of animal-print high-tops and printed, “Not for running!”

The French shoe designer hosted a men’s shoe signing in Dubai Thursday night to mark the opening of his first stand-alone men’s boutique in the region, located in the Mall of the Emirates. Gentleman from across the Gulf lined up with their Louboutins for several hours eager to get their red soles personalized by the designer.

“Men are different at signings than women,” the designer observed. “They are more into having a conversation and more engaging, less shy.”

The men’s boutique, part of a wider expansion for Louboutin in the region, is nearly three times the size of his women’s store in the same mall. And Middle Eastern men seem hungry for more. “They told me there should be even more styles in the men’s store,” Louboutin marveled.

Apropos for a region obsessed with bespoke, the boutique also includes a VIP tattoo parlor where customers can have shoes customized with embroidery that matches their personal tattoos.

Louboutin’s tour of the east continues from the Middle East to India where he is launching another customized concept — his first bespoke wedding suite at the Louboutin store in Nariman Point.  Brides will get to pick their style, fabric and heel heights to match their elaborate Indian bridal trousseau.