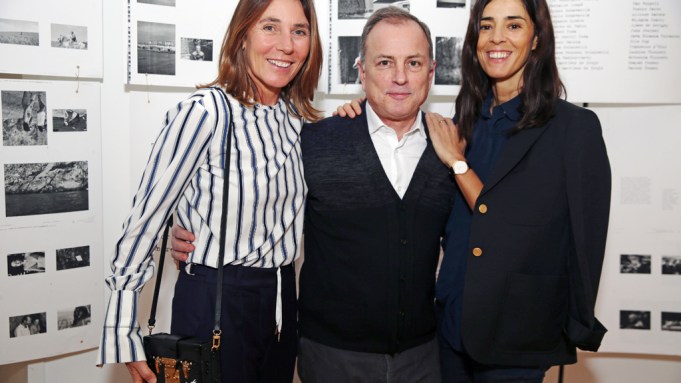 The occasion was the opening of an exhibit of black-and-white photographs by Alessandra d’Urso from a book conceived and realized by Borghese titled “For Friends.”

“I called friends from all over the world who have beautiful houses, and with them we organized each time different groups of friends to come [over],” Borghese told WWD.

The result is around 270 pictures shot in nine dream venues, including the Borghese’s Villa di Montevettolini, the private islands of Rosario in Colombia and the Château du Champ-de-Bataille in France’s Normandy.

“It wasn’t shooting. It was weekends with friends, and I took Alessandra along to document [the holidays with photos] in a very discrete way,” said Borghese. “Alessandra has a lot of sensibility and purity, so images look as if they were staged — but they weren’t. It was real.”

In one shot, Top appears sporting Louis Vuitton sunglasses in a landscape in Panarea, one of the Aeolian Islands. In another it’s Louis-Marie de Castelbajac on a boat in Corfu, Greece, looking like Alain Delon in “Purple Noon.”

“He’s the best gentleman you can imagine,” said Borghese, while flashing de Castelbajac a smile.

“I love Paris,” said Delany, who said she also plans to attend the opening this week of Peter Marino’s exhibition at Galerie Thaddaeus Ropac. “I am also here to meet with Mr. Cardin because I am a big fan. I am going to [his] atelier tomorrow to get a dress.”

So will she sport the Pierre Cardin dress at the cocktail for Marino’s exhibit?

“I don’t know. I didn’t ask for leather,” she joked. “I also love Courrèges, Paco Rabanne.”

The “Desperate Housewives” actress is to start shooting in March on the second season of a series on Amazon called “Hand of God.”

“I play the evil wife. It’s usual,” she laughed, referring to her character in “Desperate Housewives.”

While looking at d’Urso’s photographs, Ropac said: “It feels like it’s one group. It’s very homogenous.”

On the upcoming Marino exhibit he explained: “Peter is starting to install tomorrow. He already put black leather on the walls; he wanted a very special tone of black and very thin leather. He couldn’t find in Europe, so at the end he bought it in America. The show is over the top.”

On the subject of Top, the jewelry designer is presenting his new collection in Paris today at the Galerie Max Hetzler.

The showcase at the Espace Louis Vuitton runs through Thursday, while the “For Friends” tome published by Steidl and consisting of nine books enclosed in a box will be available in Vuitton stores and select bookstores starting in February.