Camille Seydoux was among the attendees at the ceremony on Thursday night. 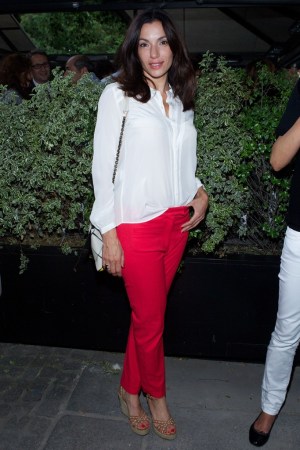 LUCKY LITERATURE: Sometimes being a loyal client to a luxury goods maker really pays off. A case in point is Françoise Sagan. The writer, who became an overnight sensation at the age of 19 with her novel “Bonjour Tristesse,” also had a penchant for Louis Vuitton accessories. On Thursday, the luxury goods retailer reciprocated with a gesture: an 8,888 euro, or $11,680 at current exchange, cash award for the winner of the Françoise Sagan Prize for Literature.

“Eight was my mother’s lucky number,” explained Denis Westhoff, who thought up the competition in 2010. “Once, on August 8, she went to the casino in Honfleur in Normandy, bet everything on the eight and won 80,000 francs at 8 o’clock in the morning. She then used the money to buy a house in Honfleur.”

“[It’s] a place where many of her works were written,” added Frédéric Winckler, Louis Vuitton’s communications director, who said he was rereading “Lady L” by Romain Gary at the moment. “It’s about the freedom of women, much like Sagan’s [oeuvre],” he explained, adding that it was the elegance with which the writer shifted the frontiers of feminism that made her great. “Shock is easy, but there is something more fundamental in movement.”

The award ceremony at Paris’ La Société restaurant drew an eclectic mix of smart and fashion.

French actress Aure Atika revealed she was engrossed in Scott F. Fitzgerald’s “The Great Gatsby.” “I didn’t want to see the movie without having read the book first,” she said. Meanwhile, French columnist Nicolas d’Estienne d’Orves divulged he had his hands full with a romantic dictionary of Paris that he will publish in 2015. “It’s going to be a weighty tome.”

Camille Seydoux, the sister of actress Lea Seydoux whose latest movie scooped the Palme d’Or in Cannes, said she was hoping to finish the novel she started writing “a while ago.” “I come from a family of writers,” explained the stylist, dressed in a glittery black jacket by Vuitton. “My niece Carmen Bramly wrote her first book at the age of 14. She’s on her fourth now. I hope she will win this prize next year.”

The lucky winner this year was Olivier Bouillère, author of “Le Poivre” (or Pepper, in English). “They are spoiling me,” the writer explained at the sight of the new leather briefcase Louis Vuitton offered him on top of the 8,888-euro check, a night in a luxury suite at Hotel Lutetia and free tea all year long at La Société in homage to Sagan, who loved to spice hers up with a shot of whiskey.

“I adooore tea,” Bouillère exclaimed. He also proved a penchant for all things retro with his literary choice. “The book on my bed table is ‘De Rerum Natura’ by Lucretius,” he revealed. “It’s [in] Latin.”