The French fashion house and accessory-maker is the first luxury brand to partner with the increasingly popular Chinese social commerce platform.

Vuitton is the first luxury brand to have an official presence on the female-led platform to capitalize on its 200 million-plus users, 60 percent of whom are from tier-one and tier-two cities, and more than 70 percent are China’s post-Nineties generation or young Millennials. Xiaohongshu is expected to double its revenue to $2.9 billion next year. More luxury brands are expected to join the platform, one source told WWD.

So far, the French luxury-maker has posted six pictures and one video, and amassed about 10,000 followers and 19,000 likes. Its content featured Chinese influencer Tao Liang, commonly known as Mr. Bags, talking about the New Wave Chain Pochette, as well as pictures of young celebrities such as Dilraba Dilmurat, a Chinese actress of Uyghur ethnicity; Chengcheng Fan, the little brother of Fan Bingbing, and Xiaohongshu influencer Baiyang Chen carrying various Louis Vuitton bags.

The tone of the writing on Xiaohongshu is very Gen Z friendly, compared to their more formal WeChat and Weibo accounts. It uses a lot of cute emojis, such as lipsticks, chains, rainbows and handbags in the description. 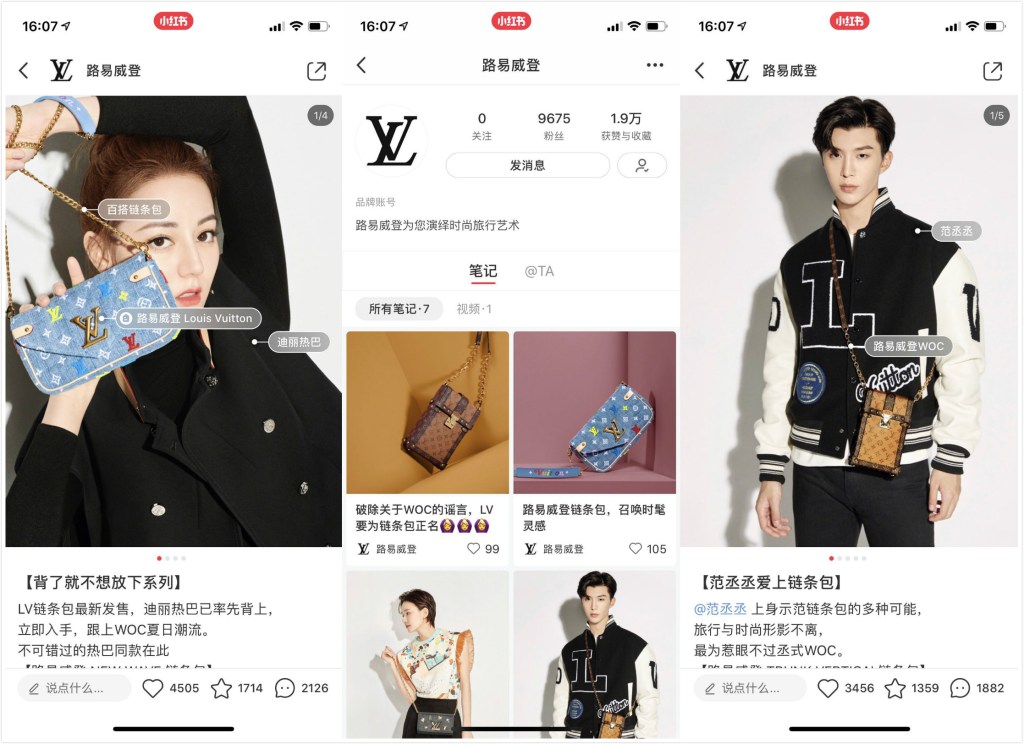 “Xiaohongshu was mainly about beauty trends at the beginning, but now it covers all aspects of life. Luxury has definitely become a very important component to it. Getting on with Xiaohongshu is a wise step for Louis Vuitton,” Liang said.

Founded in 2013 by Miranda Qu and Charlwin Mao as a shopping guide for Chinese travelers internationally, the app was able to attract an initial user base that was affluent and in the know. Its cachet remains to this day, as it has evolved from a products recommendation platform into a full e-commerce operation.

Gary Shi, general manager for Red Mall, the app’s e-commerce arm, described the trend-savvy user base to WWD earlier this year, saying, “They have a very wide perspective on global trends. They read from Pinterest or Instagram and may even be based in international big cities, and they introduce international trends to other users.”

Vuitton has always been digital savvy in China. The brand invited Chinese influencer Thomas Ye, commonly known as Gogoboi, to take over its Weibo account during Paris Fashion Week in March 2015, which was a first at that time.

It officially launched an independent China e-commerce service and several shoppable WeChat mini-programs in 2018. The VVV mini-program, which was tied to the Louis Vuitton Volez, Voguez, Voyagez exhibition in Shanghai, won best mini-program award of the year from WeChat. The company has also done special projects with Ctrip, a hotel and flight booking service provider, Mobike, a sharing biking company, and Dianping, a restaurant review platform.