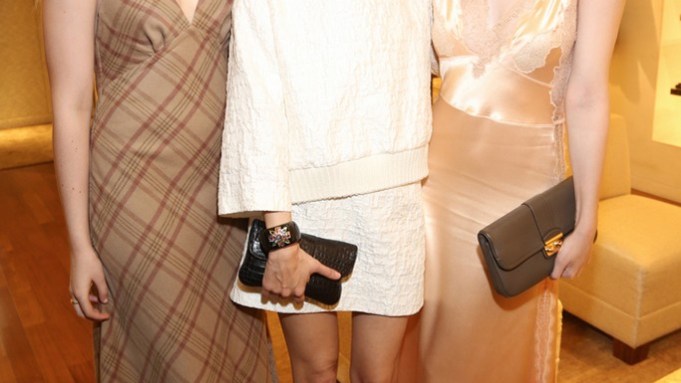 WINDOW DRESSING: Louis Vuitton celebrated its collaboration with Sofia Coppola on window displays for Le Bon Marché with a packed party at the Paris department store on Tuesday night that reunited the “Somewhere” director with her young star, Elle Fanning.

“I love Elle, so I’m always happy when I see her and I feel like she’s someone that I hope to continue to have in my life and work with,” said Coppola, who worked with Vuitton on 10 windows showcasing new versions of the SC bag she designed for the house in 2009.

With her latest feature, “The Bling Ring,” now released in most markets, Coppola is turning her thoughts to her next project. “I’m starting to think about writing again,” she said. “I don’t know, I think after ‘Bling Ring,’ I’d like to do something more beautiful, but I’m not sure what that is.”

Fanning, accompanied by her older sister Dakota, joined the director in a roped-off section of the Vuitton shop-in-shop on the ground floor of the store, where they mingled with fellow guests including Hailee Steinfeld, Haley Bennett, Eva Herzigova and Claire and Virginie Courtin-Clarins.

“We e-mail all the time. We’re very close – she’s like an older big sister to me,” Elle Fanning said of Coppola. The 15-year-old said she was looking forward to seeing “Maleficent,” the Disney movie in which she stars as Princess Aurora opposite Angelina Jolie, noting that the film would feature a plethora of special effects.

“A lot of my stuff was more just with humans and real, but then Angelina, who plays Maleficent, she was the fairy, so she had wings and all this crazy stuff. But we were pretty much always reacting to stuff that wasn’t there,” she said.

Dakota Fanning , wearing a lingerie-style champagne silk slip dress, said she got into the spirit of old Hollywood on the shoot of “The Last of Robin Hood,” which focuses on the last days in the life of swashbuckling actor Errol Flynn, played by Kevin Kline.

“Making that movie was really amazing, to kind of get to know the old Hollywood world, which was such a mysterious, kind of magical world, and it was very fun to get to kind of bring that back while making the movie,” she said.

Bennett was among the guests posing for a photographer wielding an old-fashioned Polaroid camera. “I know that it’s special because I’ll give it to my mom,” she said of the black-and-white instant portrait. “One of my most valued pieces is a bag that she gave me that is a vintage Louis Vuitton.”

The American actress has been lining up projects ranging from the film adaptation of Eighties television series “The Equalizer,” which reunites Denzel Washington with “Training Day” director Antoine Fuqua, to an untitled Terrence Malick project.

“Working with him is like a dance. It’s like an interpretive dance, you never know. There’s a script and then nothing is premeditated,” she said of the elusive Malick. “He says the most important thing is what you almost miss, what’s barely captured.”

The next morning, the same group reunited in a courtyard of the Louvre museum for what would be confirmed as the last collection by Marc Jacobs for Vuitton. Bennett was seen taking pictures of the show set, including a railway-style clock, on her cellphone.

Steinfeld said she was preparing to shoot “Barely Lethal,” in which she plays a teenage assassin who fakes her own death to have a normal life. “I’m definitely really attracted to the strong independent female roles,” the young star said.