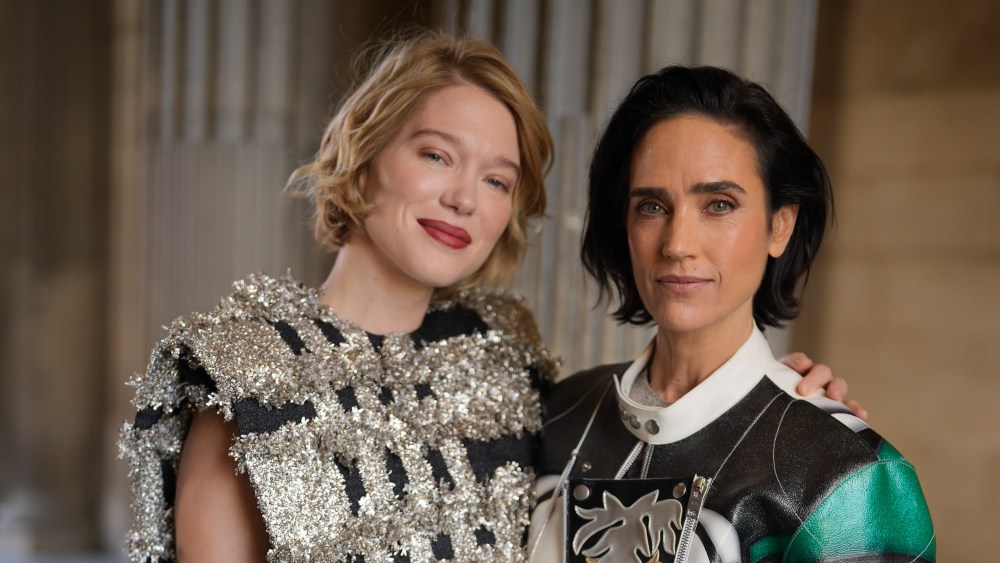 Louis Vuitton brought out the big guns — and the big accessories — to close Paris Fashion Week with a bang.

The brand had what was arguably the most star-studded guest list of the week, with Princess Charlene of Monaco seated next to the queen of pop Janet Jackson and flanked by Hollywood royalty with Alicia Vikander, Jennifer Connelly, Léa Seydoux, Cynthia Erivo and Jaden Smith — and that’s just to name a few.

Connelly was sporting a new, shorter hairstyle, having chopped her locks for Apple’s upcoming sci-fi series “Dark Matter.” “We just started the first week. I’m playing hooky right now being here,” she said. The longtime friend of designer Nicolas Ghesquière credited him for her wardrobe. “He kind of defines my style. Anything I know about fashion I learned from him.”

Vikander just wrapped the period piece “Firebrand,” with director Karim Ainouz. “I was very excited to work with him, so it was a lovely time.” She was happy to get out of corseted costumes, however, and into one of Ghesquière’s more futuristic designs.

“I really love shapes and clothes that can sculpt you. He’s very good at making extremely stylish, gorgeous, clothes whilst making them comfortable. I mean, look at these heels,” she said, while showing off some sky-high boots. “And they’re still really comfortable, I swear.”

She takes time off between projects, stays off social media and lives in the countryside in her down time, which gives her perspective, she said. “The thing is that when I come and do it, and when I get here, I’m more excited. It’s newer and fresher to me. Then I return back home. It’s like, ‘Work hard, play hard,’ then rest.”

There was no rest for runner Cynthia Erivo, who finished the London marathon on Sunday and was up fresh for a run around Paris in the morning before the show.

Erivo clocked in at three hours and 35 minutes, a personal best, down from three hours and 57 minutes. “So I did all right,” demurred the Brit. “I feel good. I’m being as kind to myself as I possibly can.”

She’s in the middle of shooting “Wicked,” in which she plays the misunderstood witch Elphaba. “It’s a full on musical,” she said. “It’s everything — the fighting the singing, the dancing, and the costumes are gorgeous.”

Her costume for the fashion show was a warrioresque colorful breast plate from Ghesquière’s cruise collection presented last May.

“It’s his fault really,” she joked, pointing to stylist Jason Bolden. “I tend to go for the riskiest thing. This felt like me and felt super powerful.” Erivo showed off her custom-made gold platforms from LV that helped her tower over guests.

Ana de Armas is also in warrior mode. Fresh off of the Marilyn Monroe film “Blonde,” she’s in training for “Ballerina,” the spinoff of the “John Wick” series. De Armas said she will be doing her own stunts.

“Well, you know, as much as I can,” she said. “I have a great team. It’s scary and fun, all of it together. They are the same team that trained Keanu [Reeves] so they know what they are doing. I’m very hands-on and it’s very exciting.”