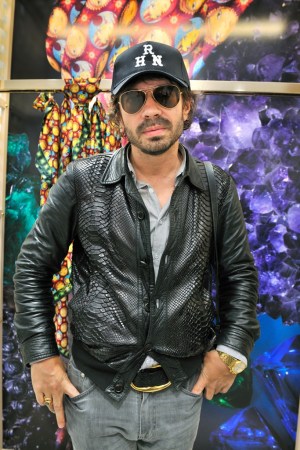 WRAPPED UP: Louis Vuitton just launched its Foulards d’Artistes scarf collection in Tokyo with the aid of Olivier Zahm, editor in chief of the French fashion magazine Purple. The scarves, designed by a group of international artists, made their retail debut at the Dover Street Market Ginza on Saturday. (They will hit other Louis Vuitton stores next month.)

Zahm shot a series of photos of the scarves and was in Tokyo for the opening reception of the exhibition on Friday night. The project coincides with another photography exhibition he is doing at Tokyo’s Last Gallery, originally owned by the late Dune magazine founder and publisher Fumihiro Hayashi.

“I was supposed to do a show of my pictures in Tokyo two years ago,” Zahm said. “Then because of the tsunami, it was postponed for two years, and then Fumihiro died of cancer.” Earlier this year, Hayashi’s wife Kazumi, who is continuing her late husband’s work, approached Zahm again about doing the long-postponed exhibition, which he said he decided to do “as an homage to [Hayashi] and to celebrate 20 years of Purple.”

Zahm enlisted Louis Vuitton to sponsor the show, and in exchange agreed to shoot photos of the scarves. Both sets of photos are currently on display at Dover Street Market Ginza.