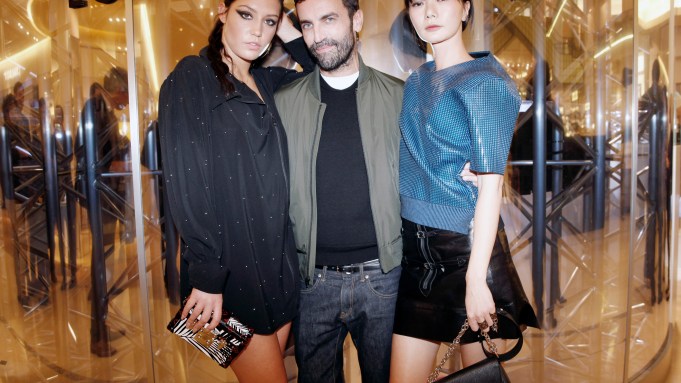 “The idea is to reflect the season,” said Ghesquière of the sight-and-sound display at the department store that is inspired by the fall-winter 2015 show.

“There are more and more series of innovations and technology [at Louis Vuitton] so it was the message for the Bon Marché: A modern Louis Vuitton.

It goes through technology, digital, a multitude of images, as well as video and sound systems. I have always been curious about technology and anticipation. I love new tools,” the designer added.

The window display dubbed “On Stage” mixes digital installation, animations, video and lighting. The exhibition, under Le Bon Marché’s central glass dome on the ground floor, is organized around themes including the monogram, mixing contemporary designs with archive pieces.

Other guests extolled the virtues of technology.

Mathias Augustyniak, one half of the graphic design duo M/M, praised the display. “There’s a part of magic to it,” he mused. Augustyniak has a Berluti book in the pipeline, to be published by Rizzoli and coming out in November.

Louis Vuitton has created a collection of its New Classics in limited edition colors, centering on indigo, exclusively for Le Bon Marché, including a pair of boots, a peacoat, a trunk, a stole and the Petite Malle handbag. The exhibit is on display until Oct. 31.