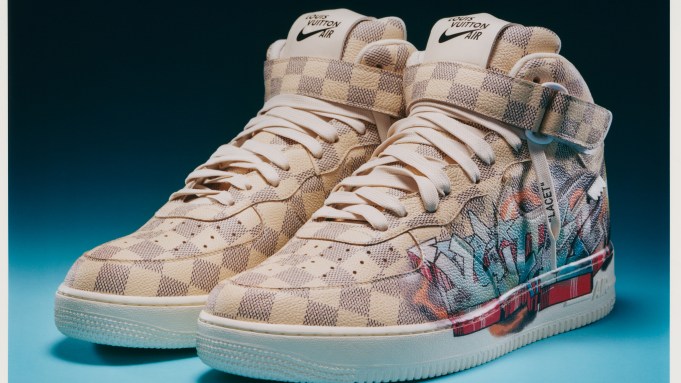 Louis Vuitton and Nike are continuing their celebration of Virgil Abloh with one of the year’s biggest fashion collaborations.

The two brands are gearing up to release a new collection of the coveted Louis Vuitton and Nike “Air Force 1” sneakers created by the late designer, who was the design house’s men’s artistic director. Abloh died in November after a private two-year battle with cancer.

The collection first debuted in June 2021 at Louis Vuitton’s men’s spring 2022 show. In February, 200 pairs were sold exclusively at Sotheby’s, which auctioned the sneakers to benefit Abloh’s “Post-Modern” Scholarship Fund. The auction generated $25.3 million. Louis Vuitton and Nike also celebrated the collection in May with an exhibit in New York City.

Here, WWD rounds up everything you need to know about the Louis Vuitton and Nike “Air Force 1” Virgil Abloh-designed sneaker collection.

What is the inspiration behind the sneaker collection?

Abloh was inspired by “Amen Break,” a drum break in the 1969 song by The Winstons, which is one of the most recognizable samples in hip-hop and jungle music. Abloh compared the drum break to the Air Force 1 sneaker, as the style was first introduced in 1982 and was a popular sneaker in New York’s hip-hop scene.

“The Air Force 1 is a sample like the ‘Amen Break,’” Abloh said in a statement provided by Louis Vuitton. “A T-shirt is an ‘Amen Break,’ a suit is an ‘Amen Break.’ We’re all iterating on the same ideas. But, in my canon, the Air Force 1 puts the edge on the blade. This object happened way before me, but to get to a context where it’s adjacent to the T-shirt and the suit, its logic has been 40 years in the making.”

What do the Louis Vuitton and Nike “Air Force 1” sneakers look like?

The nine-piece sneaker collection includes a variety of colors and design elements. The collection includes all-white and all-black sneakers embossed with the Louis Vuitton logo, a white checkered version featuring graffiti-style art, a metallic gold style and a multi-colored style featuring a silver chrome toe, among others.

When is the sneaker collection available for purchase?

The Louis Vuitton and Nike “Air Force 1” sneaker collection will be available to purchase starting Tuesday.

What is the price range for the Louis Vuitton and Nike “Air Force 1” sneakers?

How can I buy the Louis Vuitton and Nike “Air Force 1” sneakers?

The collection will be available to purchase through Louis Vuitton’s website.