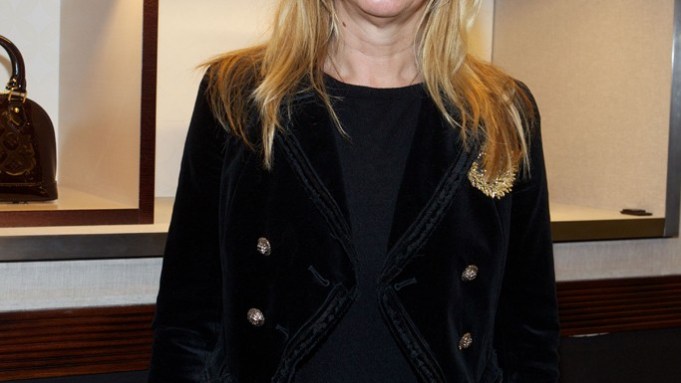 STORIES WITH BAGGAGE: Louis Vuitton could not have chosen a better location than its boutique on Place Saint Germain, an address traditionally associated with Paris’ intellectual elite, to unveil on Thursday night “La Malle,” a literary homage to its most recognizable piece — the oversized traveler trunk dating back to the house’s comparatively humble beginnings.

“Back then it was still affordable,” said Nicolas d’Estienne d’Orves, one of the 11 writers asked to pay tribute to the trunk with a funky short story.

“Hemingway had one when he was living here in Paris in the 1920s,” explained d’Estienne d’Orves. “He used it for storage of his little Moleskine notebooks but completely forgot about it, until the trunk was rediscovered in the 1950s in the basement of the Ritz.” The treasure found famously led to his writing “A Moveable Feast.”

Taking cues from Hemingway, d’Estienne d’Orves concocted a mystery story, while French director and scriptwriter Fabienne Berthaud cited I.M. Pei, the Chinese-American architect who built the Louvre’s famous glass pyramid, as her source of inspiration. “He was supposed to present his plans to then French President François Mitterrand, but lost the keys to the Vuittontrunk where he kept them. Fortunately, the trunks are numbered, so it took only a phone call [to Vuitton’s headquarters] to have the key replaced” — and la pyramide built.

The short stories assembled in the 356-page anthology are an eclectic mix of facts and fiction — ranging from Charles Lindbergh’s aviating adventure penned by Philippe Jaenada to the theft of the Mona Lisa in Patrick Eudeline’s account.

“I have a theory the Mona Lisa that hangs in the Louvre is a fake,” exclaimed the madcap rocker-writer sporting a washed-out vintage leather trench coat. “I believe the real one was destroyed by a jealous lover,” which is precisely what his story suggests.

Simon Pare, who translated eight of the 11 stories into English, gave away that his favorite was Yann Moix’s — a bitter argument that builds up through an exchange of letters between Louis Vuitton and French celebrity Sacha Guitry, who wants one of the trunks for free.

Moix, also at the cocktail party, was besieged by autograph-seekers. His 1,600-page-tome entitled “Birth” is due for release in September. So whose birth is it about?

“My birth,” replied the author, who conceded it’s an autobiography, “but just about the moments of my birth.”

Noting consternation on the reporter’s face, he added: “It’s not a joke. It took two years [to write].”