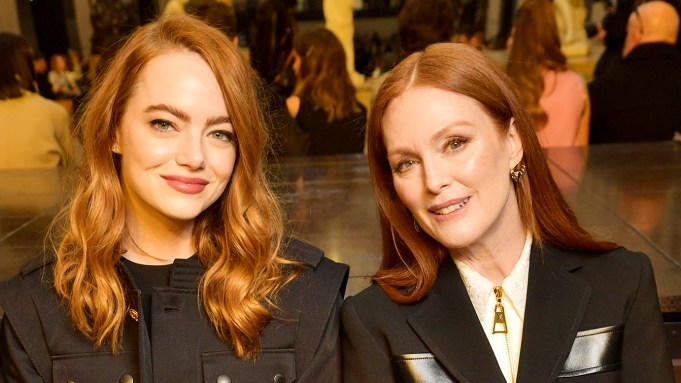 CALL MY AGENT: With a roll call of Hollywood’s finest in the front row, talk at the Louis Vuitton show quickly turned to upcoming projects.

For Louis Vuitton brand ambassador Emma Stone, who has signed on for a “Cruella” sequel, fashion proved a gateway into the character.

“Because Cruella’s a fashion designer, so much of it is not only what she’s wearing, but what she’s designing, and all of that is kind of a cohesive process,” she said. “That was very much an outside-in character. The makeup and the hair and what she’s wearing was the only way that you could actually play that character.”

The actress has also reunited with director Yorgos Lanthimos for “Poor Things,” which promises to be as twisted as their previous work on “The Favourite.” The novel by Alasdair Gray has been described as a “Frankenstein” reimagining set in the Victorian era, with Stone playing a woman who is brought back to life by a mad scientist. “It was an incredible experience. We finished in December,” she said.

Meanwhile, Chloë Grace Moretz recently wrapped her Amazon series “The Peripheral,” based on the sci-fi book of the same name by William Gibson. “A large amount of it is centered around data transfer from a human into robot bodies, and what that looks like,” she said of the plot, which jumps across different timelines.

“It’s a very interesting concept, and obviously with [“Westworld” creators] Lisa Joy and Jonathan Nolan behind it, it’s a very exciting project that I can’t wait for everyone to see. It’s pretty spooky, I think, how realistic it could possibly be,” she added.

Speaking of data transfer, she did not rule out lending her features to an avatar to star in projects in the metaverse. “I’ve always been interested in video gaming, and I think this is kind of an extension of video games and what they’ve been doing with melding humans and actors into the video game world, so it will be interesting to see how it grows into augmented reality,” she mused.

Cynthia Erivo is also straddling physical and digitally augmented roles. The English actress and singer is gearing up to star in the film adaptation of “Wicked,” and will make a cameo in the Walt Disney live-action version of “Pinocchio,” directed by Robert Zemeckis, as the Blue Fairy.

“You do get CGI wings, I think, but you also get to fly a little bit,” she said of the role. “It was really fun, and I sang, and it was the most pleasant couple of days of filming I’ve had for a long time.”

Sarah Paulson has signed on to star in the film adaptation of “Untamed,” the bestselling memoir of Glennon Doyle, the founder and president of Together Rising, an all-women led nonprofit organization that has raised more than $25 million for people in need. It details how the married mother-of-three upended her life after falling in love with a woman.

Paulson said she was drawn to the project by the “opportunity to play a woman whose pursuit of freedom overtook her pursuit of anything else in her life, her awakening and her liberation and her devotion to sussing out how that was going to work in her life, and then choosing to really live by a particular code of authenticity.”

The “American Horror Story” star has been open herself about her relationship with actress and playwright Holland Taylor, and their 32-year age difference, and hopes the film will help people at different stages of life feel comfortable to live their own truth.

“You live in California or New York, and you feel there’s a certain kind of freedom and acceptance, and then you go a little bit deeper into the country, and sometimes it doesn’t feel [like] that as much, so I think representation matters, and I think living your life as freely and openly as you are comfortable doing is also paramount,” she said.

Demi Moore, Marisa Tomei and Gugu Mbatha-Raw Got Toasty at the Chloé Show