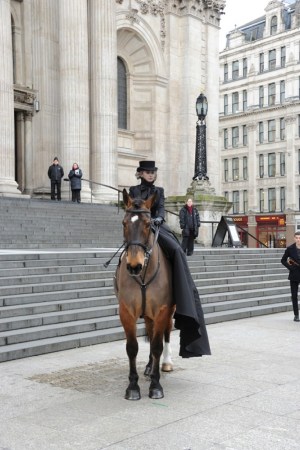 For more than two decades as course director, Wilson fueled the ambitions and honed the talents of scores of students — including Lee Alexander McQueen, Christopher Kane, Mary Katrantzou, Simone Rocha and Sophia Kokosalaki — with her own brand of tough love.

Well-known for her histrionics and utter lack of political correctness — her language was more colorful than a Pantone chart — Wilson was a relentless perfectionist, pushing her students to the brink of their imaginations and capabilities.

“I felt like she was my teacher — I went back to school when Louise took over — I graduated from the school of Louise,” said Karan, who hired Wilson to be the company’s creative director, a job she held from 1997 to 2002. “She had such a defined direction, a strong point of view. Even after she stopped working for me, Louise would visit the studio, point to a design and say ‘This has a statement. This does not.’”

Ilincic, who read the poem “Upon Julia’s Clothes” during the hourlong service, said Wilson expressed her love for her students “in an unusual way. She would support you even as she was criticizing you in the most appalling way.” Katrantzou said Wilson, who died in her sleep in May at 52, would often scream. “But that’s why you went to her office — to hear the truth,” she said.

Ilincic was among a string of former students, including Craig Green, Louise Goldin and Rocha, to lead prayers of intercession. Kane was also meant to lead a prayer, but did not attend the service because of his mother’s death earlier this week.

In his address to the 1,300 guests gathered under the rotunda, Elbaz called Wilson “my virtual tango partner.” He said that like an Argentinian dancer, he could close his eyes, and trust her to lead him. “I trusted her with my eyes shut, and for me trust equals love.”

Elbaz said Wilson helped him to staff his creative teams over the years. “She helped me to create an orchestra, as she did with many fashion houses around the world.”

Friends and family — including Wilson’s only child, Timothy Wilson-Aggrey — spoke during the service about the late academic’s life outside fashion: Her love of gardening, competitive horseback riding as a child, dancing with abandon and Cadbury’s Curly Wurly chocolate bars.

As they filed out they could see, in the cobblestone courtyard in front of the church, a woman sitting sidesaddle on a horse. Dressed in 18th-century mourning garb, her face covered in a black veil, she was Sarah Burton’s silent homage to Wilson, the horse lover.