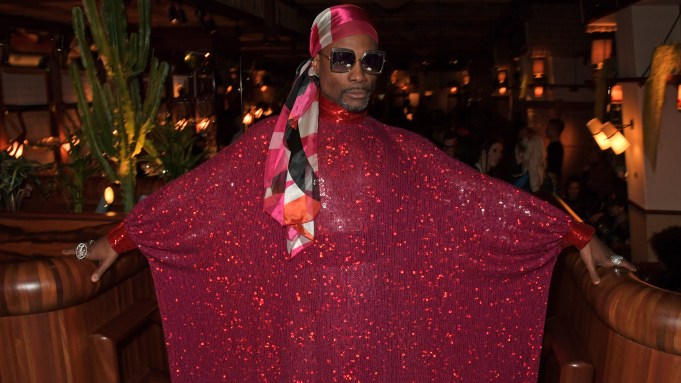 LONDON — Katie Grand, editor in chief of Love, hosted her usual fashion week party at Decimo, the top-floor restaurant of The Standard hotel, to celebrate the launch of issue 23 “Chaos + Control,” and the new team on Monday.

It was revealed last month that Ben Cobb has joined the Condé Nast title as editor in chief, men’s, while Graham Rounthwaite landed as creative director and Oliver Volquardsen as fashion director.

Grand was wearing a black-and-white Miu Miu dress and a pair of Roger Vivier shoes for the evening. She later took her shoes off and let her hair down on the dance floor at the velvet-ceilinged private bar Sweeties, with Courtney Love; Porter, who wore a fiery sequined dress by Ashish, and her designer friends, such as Ryan Lo, Matty Bovan, Christopher Kane, Jonathan Saunders and Roksanda Ilinčić.

Bovan said he had always enjoyed Grand’s seasonal gathering. “It’s very intimate. Everyone here kind of has a connection to each other in a long-distance way. Everyone had their shows done and ready to have fun,” he added.

Kane, who just had his show earlier, said “Katie’s parties are like none others. The youngest and most gorgeous are here. It’s just the party to be at, really. She is good at bringing people together to just let themselves go and have a laugh. It’s a hard time, we all need a laugh.” Alanna Arrington, Lady Amelia Windsor and Awar Mou all wore his designs to the party.

The biggest surprise for the night, for some, was to see “Euphoria” star Jacob Elordi at the party. He was in town for Burberry. His appearance at the party caused a bit of a craze for those who fell for his character Nate Jacobs in the HBO television series.