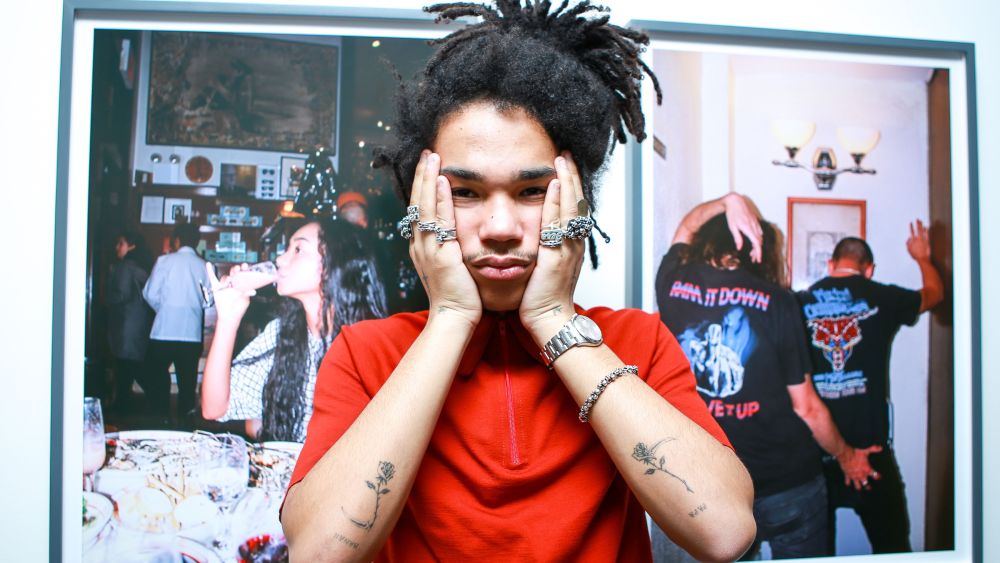 Luka Sabbat — model, stylist and all-around cool kid — buzzed frantically around the gallery at Milk on Wednesday night for the VIP opening of his first exhibition “Hot Mess,” a collaboration with budding photographer Noah Dillon.

“It’s my first show with Noah,” said Sabbat, as his father Clark — a Haitian-American fashion designer, consultant and the 19-year-old’s manager — stood nearby, both of them wearing suits. “It’s lit.”

Sabbat and Dillon’s friendship reads like a Millennial fairy-tale: Sabbat discovered Dillon’s photography and sent him a direct message on Twitter to connect. Dillon — who had a job at a grocery store at the time — flew from his hometown of Durango, Colo., to meet Sabbat in Los Angeles, where the two teamed on a photography project together. That was two years ago and they’ve been friends and collaborators ever since.

Their first creative endeavor, “Hot Mess” — a sprawling multimedia installation with an interactive virtual reality segment — features photographs taken by Dillon over the course of a year-and-a-half across New York, Los Angeles, Paris and Durango, alongside poems by Dillon’s friend, Curtis Eggleston.

The images, styled and creative-directed by Sabbat, capture moments of youthful exuberance, from the debaucherous to the mundane. In one, a young, blue-haired girl holds a rosary as a cigarette dangles from her mouth. In another, a model in cowboy boots lounges nonchalantly inside of a red car with scissor doors.

In casting the project, they weren’t interested in snagging top models or “It” girls. “We would just find the weirdest models we could on Instagram; literally girls that we can’t even find online anymore,” Dillon said. “They were that low-key.”

Virgil Abloh liked the duo’s work so much that he tapped them to conceive a photography book for his label Off-White called “Woman,” which was also on display at the exhibition. The designer and rumored Givenchy contender has been something of a mentor to Sabbat. “He’s the guy. Who else would give me the platform to actually release a book and work on shows?” Sabbat said. “It’s just a blessing. [Virgil] has believed in me since the start — before followers, before any of that.…He just knew I was next. So I f–k with him hard because he never switched up; he was always consistent, getting me work, flying me to Paris while he’s working on shows, being able to see all of that and allowing me to have creative input…and then, eventually, giving me this platform to create. It’s insane.”

Dillon, for his part, seemed surprised by how quickly it all came together. “I’ve been working really hard for five years to get to this level.…This doesn’t happen to normal people,” he said. “Hopefully, I won’t be living in Durango much longer. I mean, it’s crazy beautiful there…but we’ll see what happens.”

As an accompaniment to “Hot Mess,” Sabbat also previewed a small capsule collection of T-shirts and sweatshirts that will be available for pre-order. But he downplayed it, likening it to “merch” and insisting that it wasn’t a fashion collection. “Man, it was just a vibe,” he said. “[The clothes] make sense with all the photos we took.…Everything I designed is nice, but it’s not ‘fashion.’ Nothing was fashion. It wasn’t editorial style. It was more about the story.”

Sabbat’s Ts and sweatshirts featured the words “Hot Mess” — the duo hopes to eventually turn Hot Mess into a creative agency — and other quotations, including one that read “From a place you cannot see comes a sound you cannot hear.” They were shown on two rolling racks alongside casual pieces from other brands, such as Levi’s jeans and an Alpha Industries bomber.

The event was packed — Sabbat has upward of 336,000 followers on Instagram and 124,000 on Twitter — and rappers such as A$AP Rocky, Tyler the Creator, Pusha T and A$AP Ferg came out to support. A group of teenage boys — one in a Gucci sweater and another in a Supreme hoodie — was seen rummaging through the racks while asking Sabbat for prices.

“Hot Mess” will remain open to the public at Milk until Feb. 11.